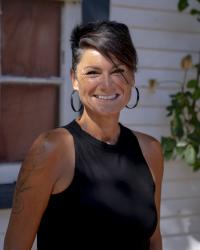 María Elena García is a Professor in the Comparative History of Ideas at the University of Washington in Seattle. She is also serving as interim chair of the Latin American and Caribbean Studies program at UW (2022-2023). A Peruvian woman of Quechua ancestry, García received her PhD in Anthropology at Brown University and has been a Mellon Fellow at Wesleyan University and Tufts University. Her first book, Making Indigenous Citizens: Identities, Development, and Multicultural Activism in Peru (Stanford, 2005) examined Indigenous and intercultural politics in Peru in the immediate aftermath of the war between Sendero Luminoso and the state. A revised version of that book was published in Peru by the Instituto de Estudios Peruanos in 2008 as Los Desafíos de la Interculturalidad: educación, desarrollo, e identidades indígenas en el Perú. García’s work on indigeneity and interspecies politics in the Andes has appeared in multiple edited volumes and journals such as Anthropology Now, Anthropological Quarterly, Environmental Humanities, International Journal of Bilingual Education and Bilingualism, Journal of Latin American and Caribbean Anthropology, Latin American Perspectives, and Latin American and Caribbean Ethnic Studies. Her second book, Gastropolitics and the Specter of Race: Stories of Capital, Culture, and Coloniality in Peru (UC Press, 2021; winner of the Flora Tristán Prize for Best Book 2022, Peru Section, Latin American Studies Association), offers a critical exploration of Peru’s so-called gastronomic revolution, focusing on the intersections of race, species, and capital in that country. Her next project, Landscapes of Death: Political Violence Beyond the Human in the Peruvian Andes, considers the impact of political violence on other-than-human life (animals, lands, rivers, glaciers) in Peru during the recent war between the state and the Shining Path (1980-2000). More specifically, this project carefully explores the testimonies of Indigenous peoples (collected by the state-sponsored Truth and Reconciliation Commission or CVR) about the violence suffered by their non-human kin, the brutal severing of relations, and thinks through the significance of forms of mourning as expressed by both human and non-human beings. This project is anchored by the insistence of many Native scholars about the need to move beyond “damage-centered narratives” (Tuck 2009), and the importance of research that centers Indigenous language, being, and knowing. You can learn more about García's teaching and research here.