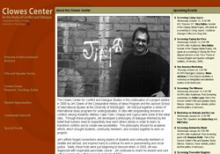 The Clowes Center for Conflict and Dialogue Studies is the continuation of a project started in 2000 by Jim Clowes of the Comparative History of Ideas Program and the Jackson School of International Studies at the University of Washington.  Jim had put together a series of international study programs for undergraduates, in sites with longstanding divisions or conflicts among residents: Belfast, Cape Town, Chiapas and Cyprus were some of the initial sites.  Through these programs, Jim developed a philosophy of dialogue informed by the belief that humans need to respectfully hear each others stories in order to learn, to transform conflicts and to create new possibilities.  This philosophy infused his academic efforts, which brought students, community members, and scholars together to work on projects.