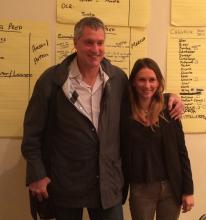 The Oscar-nominated documentary Crude is a fascinating story that resonates on many levels: the environmental and humanistic impact, the cultural impact on Indigenous peoples, and of course, the narrative of David verses Goliath. My involvement, albeit microscopic in the grand scheme, begins where the documentary left off.

The Ecuadorian court awarded $18.5 billion to the 30,000 indigenous Ecuadorians.  Since the verdict was issued, Chevron has spent hundreds of millions of dollars prosecuting Steven Donziger, a U.S. attorney that helped represent the Ecuadorian people, and all the others associated with the plaintiff team.  In the Southern District of New York, Donziger is defending himself against charges of fraud and racketeering, allegedly bribing the judge, and manipulating the legal process.

I am providing support to the trial team for Mr. Donziger, which consists of a handful of dedicated humanitarian lawyers (most of whom are working pro bono), human rights activists, Steven Donziger, and three trial lawyers who agreed to assist just weeks before the start of trial.

My interest in this case began in María Elena García’s Indigenous Encounters class.  I was awestruck by the travesty in Ecuador and the severe impact of Chevron's contamination on the indigenous population.  I continued to follow this case after graduation because of the broad-scale impact on the Ecuadorian population. When the opportunity surfaced to become involved, I leaped!  This was a unique opportunity to collaborate with individuals actively working with indigenous peoples impacted by external forces and to address human rights issues.

I jumped on a plane and have been working out of an apartment for six weeks.  The experience has been surreal, exciting, and exhausting.  I’ve met Harvard-educated lawyers who work directly with indigenous populations in Latin America.  I’ve met individuals just like my fellow graduates, who travel to places of need and establish water purification programs and other needed projects.  It’s powerful and inspiring.

This opportunity of working with dedicated humanitarians and learning from their experiences, has helped me focus my future plans of international humanitarian work, which was a goal of mine during my CHID and anthropology studies.

Or this website, which is a campaign against Chevron and their contamination: http://chevrontoxico.com