THE STRUGGLE IS REAL: Community Organizing in Seattle 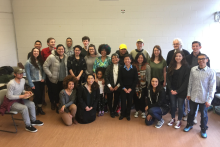 Students often say that their CHID classes are by far the most intellectually stimulating courses they have taken at the UW. This is because CHID’s philosophy is rooted in providing critical thinking tools to students. CHID 250: Critical Community Organizing is one of the courses these students are talking about. In Winter 2017, CHID offered this pilot course on the basics of community organizing, instructed by former Washington State 11th District Representative Velma Veloria and Third Andresen, PhD. Both have extensive community organizing backgrounds in the Filipino American community. The Critical Community Organizing course provides an academic and practical action framework of community organizing to effect social and policy transformation.
The curriculum includes a community-based experiential learning component. As part of their coursework, twenty-six (26) ethnically diverse students examined the basic roles essential to community organizing such as campaign planning strategy, data collection, volunteer recruitment and retention, fundraising, training, and coalition building. In addition, students gained knowledge in navigating the legislative process including budget procedures in the context of equitable allocation of funds. Students became familiar with a range of community organizing approaches and issues encountered by Indigenous communities and local social justice organizations such as Equity in Education, Rajana Society, Gabriela USA, Asia Pride, Seattle Black Book Club, and MAPS Amen, among others. One student noted, “These are the kinds of culturally, socially, politically, and intersectional-focused conversations that I wish I could have in all my classes.”
The class also incorporated elected officials as guest speakers, such as Seattle City Councilmembers Kshama Sawant and Deborah Juarez, King County Councilmember Larry Gossett, and Washington State Supreme Court Justice Mary Yu. They shared some of their history and their routes toward service as elected officials. These pathways developed from their grassroots level community organizing experiences and their passion to create social justice change. Justice Yu articulated, “Everything about power in organizing is local. To not be engaged is frankly a greater risk to society than anything else.” One student thought that, “A lot of the discussions and ideas presented challenged conventional views and really picked apart the flaws of the system.” Another student claimed, “The guest speakers and the conversations we had forced me to rethink my own ideas about community organizing, identity, and oppression.”
Students participated in Legislative Day in Olympia. They went to the State Capitol to advocate for issues they cared about with their legislators. Students also learned how to follow the progression of and critically analyze a bill: they identified who introduced the bill, from which district it originated, the legislation’s intent and purpose, discussion around the bill, the types of amendments that were placed and accepted, whether it passed or not, and how it impacts communities of color.
Students were also required to present a Service Learning project related to the community-based organization that they researched/engaged with throughout the quarter. The Service Learning component provided a unique opportunity to connect coursework with life experience through public service. One of the students stated, “I have always been interested in community organizing and this class brought a very real perspective on it.”
As the end of the quarter approached, students wondered if the course would be offered again. They learned the value of a course that addresses the University of Washington’s Race and Equity Initiative; provides a basic community organizing theoretical framework, resources, and service-based learning; and encourages students interested in working in community-based, non-profit, grassroots organizations and public office. During the quarter, students collectively organized with other student groups, suggesting and demanding that this class be offered again and institutionalized. They would also like to see a degree in community organizing in the future.
The spirit and the message of the class continued after Winter Quarter when the class organized to meet with Seattle Mayor Ed Murray. Students honestly and openly discussed issues facing Seattle such as gentrification, police brutality, and homelessness. CHID Director María Elena García attended and was impressed by the students’ passion, intelligence, and purpose. Even Representative Veloria agreed with the students as she exclaimed, “Wow, and what a course it was!” She also said, “For me to interact with these bright young minds was very powerful. I see the new generation of leaders creating social justice change in a very new and engaging perspective.” And, when one student reflected, “I question my thinking more,” well, that’s what CHID classes will do for you.
By Third Andresen and Velma Veloria
People Involved:
Third Andresen
María Elena García
News Category:
Share
PrintPDF