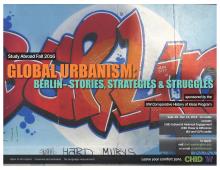 This program is co-sponsored by the Department of Architecture

Berlin has become a global destination. From a Cold War island between East and West, it has transformed into the real and symbolic capital of German reunification and a nexus of European integration. Since 2011, however, the city has become a site of migration. Currently, the city of 3.6 million is housing some 70,000 refugees, half of them applying for asylum. In this context, the Autumn 2016 CHID Berlin program will explore the ways in which processes of migration change our notions of urban globalization.

Berlin’s profound reversal from a divided city into a center of unification is celebrated in the city’s most paradigmatic sites: the governmental district, the World Heritage site of the museum island, and the international hubs of its three airports. Currently, these latter sites serve to envision Berlin’s future development. While the new international airport is under construction, the one used currently is planned to become a tech park for applied research on “urban futures.” In contrast, the third airport, after ceasing operations in 2008, has been turned into a site of resistance against development. As Berlin’s largest park, it is an “experimental field” for the city’s fashion and music industries, as well as its communities of joggers, rollerbladers, kite-flyers, wind-karters, and urban gardeners. More recently, responding to the 2015 European migrant crises, the city uses it as an emergency refugee shelter for roughly 3,000 people and plans to build additional temporary housing. How does this process of migration challenge our notions of urban globalization? Does it change the ways in which we envision and spatialize “urban futures”? Can concepts of temporary, “experimental” urbanisms respond to this challenge?

These are the critical questions that the 2016 CHID/ARCH Berlin Program will address. We will engage Berlin as a stage of heterogeneous, often conflicting scenarios, a stage of the stories, strategies, and struggles of global urbanization. To explore their spatial implications, we will not only visit the parliament building and governmental district, the museum island, and the airports, but also the contested sites of marginalized, ethnically diverse, and gentrifying neighborhoods, the experimental sites of Berlin’s creative class, squatters, and urban gardeners, as well as the city of globalizing trade and the German aviation industry, Hamburg.

The program is organized as a course-trilogy of “stories,” “strategies,” and “struggles,” consisting, dependent upon departmental requirements, of either two weekly seminars or a seminar and a design studio, as well as independent study and guest lectures. The partnership with Humboldt University and collaborations with peers from Berlin’s other universities will allow the development of “comparative urban pedagogies” (Jane M. Jacobs), a spectrum of different approaches to and methods of global urbanism. In this context, we will visit the Bauhaus Dessau as a site of a design school with a “global legacy,” today engaging in issues of global urbanization.