Historical Memory, German Unification, and the Future of the European Union 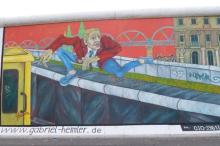 Sponsored by the Comparative History of Ideas and JSIS

Berlin is a city with many faces: In the last century alone, it has been at the center of two World Wars, the sight of the Cold War and the Wall, as well as the epicenter of unification and European integration of East and West. The fall 2012 CHID/European Studies program in Berlin will explore the city as a prism for German history, unification, and European integration more than two decades after the fall of the wall. Have Berlin and Germany become unified? How can we read the social, cultural, and architectural markers of a divided past, and how do they extend into the future? What did political unification mean for the citizens of Berlin, and how have economic and social changes impacted post-Cold War German identities? What role does Germany play in the current European debt crisis and will its new power in international relations be welcomed in Europe? We will address these questions by way of urban explorations in the German capital, in meetings with public officials, social activists, artists, and journalists as well as through a wide variety of thematic texts and other media. Courses include two weekly seminars and an independent study; on-site visits and guided tours as well as guest lectures. An optional four-week intensive language course will be offered in Berlin before the fall program begins (this option requires an additional fee). Students will be required to attend a 1-credit, non-graded orientation seminar in spring 2012 Field Trips: Students will visit the German Parliament, the STASI (secret police) museum, the Berlin Wall museum, the Jewish museum, party headquarters, major art galleries, and other relevant sites in Berlin. We plan field trips to Munich and Prague. Costs for these trips (transportation, hotel, entry fees) are included in the program fee. A partnership between the University of Washington and the Humboldt University allows our students to use Humboldt’s libraries and computer facilities and regional transportation pass.. Here are some student comments from my last Berlin Program in 2009: “Berlin is the most amazing city I have ever been to, hands down – and I had done a good amount of traveling. The opportunity to learn from these particular professors in such an astounding location is awesome”. “Studying in Humboldt University campus was a really positive aspect of the trip”. “I had two of the best professors I have ever had the pleasure of learning from. Extremely knowledgeable, approachable, insightful, interesting instruction. Aside from being in Berlin, I would say the quality of the professors made the learning experience excellent”.