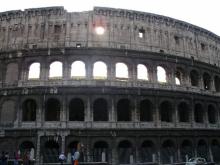 Sponsored by: The Comparative History of Ideas and the Department of English

The CHID spring Rome Program offers two courses that take full advantage of Rome’s unique character as an historical and urban palimpsest with multiple layers of development that transcend but include the preceding ages in an intertextual dialogue across time. The Roma Eterna course considers the historical periods of Rome as distinct “foreign” cultures that help to bring into relief the temporary and contingent character of American, and more broadly, contemporary culture and society. Rome is one of the richest sites in the world for exploring the full span of human development from the iron age hill settlements of its foundations through the Fascist appropriation of the symbols of imperial power and the attempts by contemporary Rome to assert itself as an international center of the arts through the recent inauguration of the MAXXI museum of modern art of the 21st century. The course on Gift and Sacrifice explores in a foundational way the primordial origins of all societies through relations of reciprocal exchange, obligation, and religious piety. These courses are intended to serve the CHID program’s focus on critical consciousness through an intensified, comparative approach to historical phenomenology, and to the aesthetic structuring of urban space along with its social, cultural consequences.

The site of Rome is ideally suited to the course objectives because the historical center of Rome provides in very close proximity the convergence of multiple historical layers that allow for an ongoing comparative analysis. We will take full advantage of Rome's unique historical character through site visits four times a week linked to textual guides on the historical periods and the structural evolution of Rome.

In addition to Rome, however, the program will also take students to Venice, Florence, Tivoli and Capri, in order to gain an appreciation of the differences in character among Italy's regions. These are required excursions, and the travel and lodging costs are included in the program fee.

This program is based at the University of Washington Rome Center, located in the historic Campo dei Fiori.

*Please note that this does not include UW Study Abroad (IPE) Fee ($275), airfare (about $1100, subject to when and where you buy your ticket), food (about $44/day), Study Abroad Insurance ($37/month) and personal spending money.