Art and Innovation in Lyon 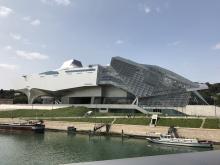 In America, science and technology are understood as practical drivers of society, whereas the arts are largely considered optional and apart.  But exploring older societies, such as the major centers of Europe, reveals the primary role of arts and culture in the formation of cities and their civilizations.  The fine and applied arts have been integral to Lyon’s development as a world city, spurring scientific and technological innovations, commerce, and urban development throughout the region’s illustrious history.

Developing critical skills to analyze and comprehend this evolution provides the basis for understanding foreign places in general, while providing a model for future development in the U.S. Learning the basics of visual analysis, theories of place-making, and cultural criticism, students will develop techniques to explore societies new to them and ways to apply this innovative approach of thinking to their own studies. Students will also have the opportunity to experiment with their own approach to visual expression whether through photography, drawing and other forms of notation.

Lyon, a UNESCO World Heritage site, the second largest city in France, and its gastronomical capital, offers a unique environment where art has been an economic engine for centuries.  Two historical examples are the influence of fiber arts and cinema on technology and city form. The silk industry transformed Renaissance and 19th-century sections of the city; at the turn of the 20th century, native sons Auguste and Louis Lumière invented cinema in a neighborhood that still bears their stamp and where film flourishes today.

In addition to technological innovations where art has been integral, Lyon is celebrated for its integration of art, architecture, and urban design. Its legacy of public spaces in the Renaissance foreshadowed the notion of human-centered design centuries before the term was coined. In the 21st century, Lyon’s Confluence District, one of three E.U. urban redevelopment demonstration projects, represents the most innovative integration of sustainable design in art, architecture, and landscape architecture.  Lyon is also a leader in contemporary art and dance with multiple performance venues, alternative spaces for visual arts, and art integrated in the landscape, creating a dynamic environment for learning.

Exploring this remarkable city, taking advantage of its diverse cultural offerings and immersing oneself in unique contemporary and traditional environment, each student will come away with new insights about how to live, learn, work and play.

*Note that the fees stated above do not include some additional costs, including, but not limited to: airfare, UW Student Abroad Insurance ($1.64/day), and personal spending money. Remember that these costs will differ by program. Be sure to read our Fees, Financing, and Withdrawal information for details about the fee structure and payment schedule.

Past Programs in France