Political Landscapes of Buenos Aires: Neoliberalism and the Struggle for Alternatives 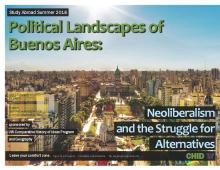 Co-sponsored by the Department of Geography—coursework counts towards the Geography major/minor.

This program will provide students the opportunity to study the interplay between the enforcement of neoliberal measures and civil society's actions of resistance in the culturally eclectic and politically vibrant city of Buenos Aires. The goal is for students to to understand cities as evolving, complex, and contested landscapes shaped by—and with the power to shape—neoliberal measures and policies. We will explore the ways in which the political landscape of the city is crisscrossed by a multiplicity of social and political movements that contest and question the legitimacy of the neoliberal agenda by focusing on different moments in the political economy of Buenos Aires in the last four decades. We will examine the relation between changes in the materiality of the city and the contestations taking place across time, and we will pay attention to the different actors involved: the state, private investors, policy makers, and urban planners, but also unions, neighborhood associations, human rights organizations, and organizations of students, the unemployed, women, indigenous communities, and afro-descendants, among others. Ultimately, the landscape of the city is the result of the struggles over what kind of city Buenos Aires should be, and for whom.

Students will take classes in the space of a grassroots organization in the old neighborhood of San Telmo, attend talks at different universities in the city and greater Buenos Aires, and engage with different organizations currently contesting neoliberal agendas and proposing alternative ways of imagining social, economic, cultural, and political relationships. We will also walk the city based on "thematic tours," which differ from touristic and other traditional ways of approaching the city. Our visits will include sites of memory, such as former clandestine centers during the 1976-1983 dictatorship; spaces of conspicuous consumption characteristic of the 1990s, like shopping malls and the newest neighborhood in the city, Puerto Madero; recuperated factories run by their workers; and gentrified former working-class neighborhoods, witnesses to the enormous inequalities in terms of wealth and access to services that can take place in close proximity. Throughout all of our walks, we will look beyond the built environment to uncover the struggles and conflicts, the actors involved, and the imaginaries mobilized that constitute the city. The program also includes visits to two other cities in Argentina where contestations against business-oriented political agendas also shape the urban space: Rosario (Province of Santa Fe, in the region of the Pampas), and Bariloche (Province of Río Negro, Patagonia).

Past Programs in Argentina