Tolerance, Identity, and Difference in Amsterdam 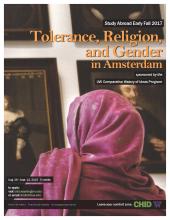 Russell Shorto has called Amsterdam “the world’s most liberal city,” and indeed, its citizens take pride in this international reputation. The Netherlands is well known for its liberal attitudes towards drug enforcement, legalized prostitution, and gay rights, and tolerance is heralded as a centuries-old national virtue. Recent events, however, have brought this self-congratulatory attitude into question. In debates over immigration and multiculturalism, public commentators from across the political spectrum have argued for the limits of tolerance and the need to defend Dutch national identity against intolerant views, especially those putatively associated with Islam.

For example, in 2009, politician Geert Wilders proposed a “headrag tax” in the Dutch parliament which would be imposed on wearers of Islamic headscarves. Though the ruling coalition dissolved before a vote could be held, Wilders’s inflammatory suggestion pandered to views shared by a broad swath of the Dutch population. Although Wilders was recently convicted for inciting racial discrimination against Moroccan-Dutch people, his Partij voor de Vrijheid or “party for freedom” commands the support of about 20% of the electorate. Since the explosive murders of politician Pim Fortuyn in 2002 and film-maker Theo van Gogh in 2004, large segments of the Dutch populace have expressed fear, anxiety, revulsion, and anger towards Dutch Muslims, whether recent immigrants or the children or grandchildren of so-called “guest workers” from Morocco and Turkey who helped power the Netherlands’s economic recovery after World War II. Racial minorities, more generally, are often regarded as not being echt Nederlands or "real Dutch." In practice, then, "tolerance" typically amounts to the majority white population "regulating its aversion," to adapt Wendy Brown's felicitous phrase.

This program contextualizes these debates by exploring the role of the concept of tolerance in the narratives of Dutch national history and in contemporary debates about the place of religion, race, gender, and sexuality in Dutch identity. Using Amsterdam as an historical, geographic, cultural, and political site of analysis, we will explore Dutch ideas and practices of tolerance, particularly since World War II, and how these historical legacies are mobilized in conflicting ways in contemporary debates over national identity and the ambiguous politics of "multiculturalism." Dutch academics, activists, cultural practitioners, and politicians will serve as interlocutors for our discussions, and students will be asked to reflect on how these debates intersect with their own experiences, both abroad and at home. In the first half of the program, historical and theoretical analysis will be integrated with visits to Amsterdam’s many monuments and memorials, from the globally known Anne Frank House to recent additions such as the Monument of Awareness on Surinam Square. In the second half of the program, students will work on collaborative projects that engage with debates over cultural identity and recognition.

Important note: all participants will be required to attend a weekly pre-departure seminar during Spring quarter. Meetings will be held Wednesdays, 3:30-5:20 (location TBD). Two credits (CHID 298, C/NC) are available.