Discourses of Change: Continuties and Transformations in Central and Eastern Europe 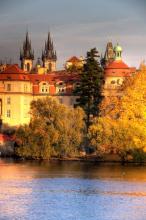 Graced by numerous hills and the river Vltava, Prague is one of the most historically and culturally rich cities in Europe. Relatively spared from natural disasters and war, Prague boasts magnificent architecture ranging from Gothic, Renaissance, Baroque, Art Nouveau and Cubist styles. In exploring the city, you will also find countless theatres, blackened statues of long ago kings, hidden churches, curved cobble-stoned streets, symphonies, as well as marvelous gardens, bars and cafés. Communism has also left a very strong imprint on Prague and Czech society, leaving behind not only legacies of authoritarianism, but also socialist industrial plants, housing structures, and monuments. Given this past, today's Prague may surprise you with its globalized consumer culture, polished luxurious downtown shop window, upscale boutiques, clean and efficient public transportation and "only" 35 McDonalds and 9 Starbucks. The year 2009 marked the 20th anniversary of the collapse of the communist regime in 1989 and the subsequent twenty years of developing democracy and market capitalism. In 2012, the Czech Republic will be already in its third decade as a democratic, post-communist country, being a member of the European Union since 2004 and having joined NATO already in 1998. These different layers of Czech history make Prague an ideal place in which to explore the complex relationships and contradictions that together have made up the history, culture and politics of the region. The Prague Program is the oldest CHID study abroad program at the University of Washington. The program itself is largely based on the philosophy of CHID: it combines academically rigorous seminar-style courses, international field trips aimed at provoking personal reflection and exploration, and cultural events that transform our program into a living community. We hope that students in the program not only critically explore the intersections of Central European history, society, and politics, but also, in the process, become themselves transformed by the places, people and ideas they encounter.

Past Programs in Czech Republic