Legacies of Empires: Power and Diversity in Vienna 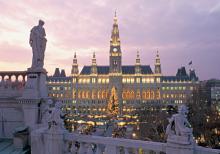 The world of independent nation-states identified with a single and unified people, language, and culture is now being challenged by increasingly accelerated processes of cultural, economic, and political globalization. The goal of this program is to show how this world, which we consider as obvious and relatively stable, is a very recent and fragile historical phenomenon. For many centuries, vast empires comprising diverse peoples ruled and determined their lives and their destinies. Many of the ideas, ideals, ideologies, and policies of the Roman, Byzantine, Hapsburg and Ottoman Empires are still relevant and often essential in order to understand the often contradictory and unresolved issues of today’s world.

Vienna, originally founded by the Romans in the second century C.E. as a fortified citadel called Vindobona, has played a central and decisive role since the late middle ages, as the capital of the Holy Roman Empire, in shaping the political and cultural landscape of Europe. Vienna, now the capital of Austria, is also a global city: a fascinating mix of tradition and innovation, of cultural identity and cosmopolitan diversity. As the former capital of a multiethnic imperial system that collapsed only a century ago in 1918, Vienna is still one the most culturally rich and fascinating cities of the world, renowned for its history, art, music, architecture, cuisine, and its vibrant and multifaceted cultural life. Vienna’s complex and intricate urban setting, its monuments, museums, and cultural and artistic life are a labyrinthine and powerful testimony of its central role in the history of Europe, and of its contemporary central position in the cultural life of the Western world.

The study and exploration of the legacies of empires—embodied, preserved, and still alive in Vienna—will allow the students to acquire new and more refined intellectual and experiential tools and instruments to analyze and comprehend many of the challenging contemporary issues (religious and ethnic conflict, racism, xenophobia, etc.) marking the beginning of the 21st century. A part of the program will give the students the possibility to establish direct contact and develop relations with local intellectuals, activists, and artists. The students will also have the possibility to encounter representatives of Christian, Jewish, and Muslim communities in these countries and to see how their sense of identity changes according to different social and political contexts. There will also be meetings with representatives of the Roma communities in Central Europe in order to have a direct experience and a better understanding of a transnational minority, appreciate their heritage and culture, and understand their often difficult situation and challenges in a nationalistic and post-imperial Europe.

What is power? What is authority? What is religion? What is a state? What is a people? What is a culture? What is a nation? What is cultural and ethnic diversity? What is a just or unjust war? The study and exploration of the legacies of the empires will allow the students to acquire new and more refined intellectual and experiential tools and instruments to analyze and comprehend many of the challenging contemporary issues (religious and ethnic conflict, racism, xenophobia, etc.) marking the beginning of the 21st century.

To get a feel for Vienna, check out this video!