Legacies of Empires: Power and Diversity in Rome, Vienna, and Budapest 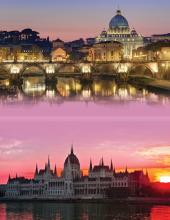 The world of independent nation-states identified with a single and unified people, language and culture is now being challenged by increasingly accelerated processes of economic and political globalization. The goal of this program is to show how this world, which we consider as obvious and relatively stable, is a very recent and fragile historical phenomenon. For many centuries, vast empires comprising diverse peoples ruled and determined their lives and their destinies. Many of the ideas, ideals, ideologies and policies of the Roman, Byzantine, Hapsburg, and Ottoman Empires are still relevant and often essential in order to understand the often contradictory and unresolved issues of today’s world.

Rome, as the capital of the Roman Empire and later the center of Western Christianity, provides an unparalleled location to study the crisis and fall of the Roman Empire and the rise of Christianity as a new world religion and its role in shaping the culture, art, and literature of the West. It is also an ideal location to study the complexities of Italy as a country and as a recently formed nation-state.

Vienna, the former Imperial Hapsburg capital, is the capital of Austria, and one the most culturally rich and fascinating cities of the world: its complex and intricate urban setting, its monuments, museums, and cultural and artistic life are a strong and powerful testimony of its central role in the history of Europe, and of its contemporary central position in the cultural life of the Western world. Vienna also provides the students the possibility to better understand and connect together, at several levels, many elements of their experience in Rome and in Budapest.

Budapest for centuries stood on the fault line of friction and confrontation between the Holy Roman (and later Hapsburg) and the Ottoman Empires and is today the capital of Hungary, a recently formed nation-state with one of the most unique and peculiar languages and cultures of Europe. Hungary struggled for centuries to preserve and maintain its ethnic and cultural identity. It is a fascinating location to carry out the study of the clash between imperial systems and the theme of the quest for national identity and independence. In each of these locations, the courses will be integrated with a coherent and structured program of guided tours to historical, artistic, and cultural sites, museums, etc. Special emphasis will be placed on allowing the students to constantly connect historical events and dynamics to their everyday life and experience in Italy, Austria, and Hungary.

The study and exploration of the legacies of these Empires should also allow the students to acquire new and more refined intellectual and experiential tools and instruments to analyze and comprehend many of the challenging contemporary issues (religious and ethnic conflict, racism, xenophobia, etc.) marking the beginning of the 21st century. A part of the program will give the students the possibility to establish direct contact and develop relations with the Roma communities in Rome and in Budapest in order to have a direct experience and a better understanding of a transnational minority, appreciate their heritage and culture, and understand their often difficult situation and challenges in a nationalistic and post-imperial Europe.

*Note that the fees stated above do not include some additional costs, including, but not limited to: airfare, Study Abroad Insurance ($1.64/day), and personal spending money. Remember that these costs will differ by program. Be sure to read our Fees, Financing, and Withdrawal information for details about the fee structure and payment schedule.

Past Programs in Italy, Hungary, Austria