Sovereignty, Environment, and Representation in Aotearoa 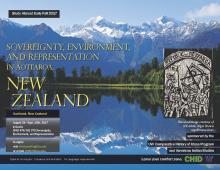 To many people, New Zealand represents the fantastical landscapes of Middle Earth from the block-busting Lord of the Rings films. But its stunning beaches and fjords, volcanic peaks, and temperate rainforests filled with towering plants from the Jurassic Period compose Aotearoa, the homelands and waters of indigenous Māori iwi (peoples). New to the Study Abroad offerings, this program will visit important sites where North Island Māori communities and the New Zealand nation-state confronted – and continue to confront – issues of sovereignty, environment, and representation. Similar to the experiences of other indigenous peoples, a treaty (the 1840 Treaty of Waitangi) frames Māori relations with the settler-colonial state and protects critical indigenous rights to culture, resources, livelihoods, and authority. Unique to Aotearoa (New Zealand), however, is the Waitangi Tribunal, a government commission that investigates and adjudicates treaty claims raised by Māori communities against the state. Often hinging on cultural and historical evidence, many of these cases involve land and sea claims and access to and control over natural resources. By interacting with Māori scholars and leaders and visiting sites related to the Treaty of Waitangi, key tribunal cases, and cultural representation, students will gain a deeper understanding of how these themes shape indigenous and state interactions in a settler-colonial context on the other side of the Pacific.

After arriving in Auckland, we will travel to the stunning subtropical Bay of Islands, the location of the Waitangi Treaty Grounds and self-described “birthplace of New Zealand.” While recovering from our jetlag, we will tour the treaty grounds and visit Ninety-Mile Beach, the site of an important Waitangi Tribunal case that examined Māori rights to the foreshore. From there, we will return to Auckland to spend a week interacting with students at the University of Auckland and visiting important sites of cultural representation, including the Auckland War Memorial Museum, a Māori language class, and an urban Māori radio station. After a short flight to Wellington, the capital of New Zealand, we will spend our second full week visiting the headquarters of the Waitangi Tribunal and Te Papa Tongarewa, the Museum of New Zealand. A highlight of our time in Wellington will be two nights spent on Matiu/Somes Island, a predator-free scientific and research reserve owned by Te Atiawa, a local Māori iwi. After Wellington, we will return to Auckland and depart for a rural marae. We will tour some important historic and cultural sites, with a side trip to the Maori Arts Crafts Institute at Te Puia in Rotorua, a geothermal region of the North Island.

The program features extensive collaboration with indigenous communities, including group meetings/class sessions, communal dinners, and exchange opportunities with Māori students, experts, and communities. Additionally, we will explore Auckland and Wellington, two dynamic and beautiful Pacific cities. By the end of the trip, students will have a greater appreciation and understanding of indigenous issues of sovereignty, environment, and representation.

Past Programs in New Zealand