CHID Spain: The Basques, the Catalans, and Spain 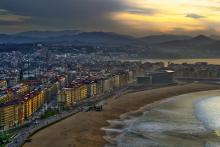 The program will start in Barcelona, where we will spend a week studying Catalan culture and the Catalan independence movement.  Then we will travel to the city of San Sebastián in the Basque country of northern Spain to spend the rest of the quarter studying the culture, politics, and history of the Basques.

The Basque culture of Spain and France is one of the most ancient in Europe, having maintained its separate identity since before Roman times. Even though Spanish is widely spoken in the Basque country, the Basques have their own language, unrelated to Spanish, and the death of the dictator Franco in 1975 and the ensuing re-integration of Spain into modern Europe sparked movements of cultural and linguistic renewal in the Basque country—including a separatist movement that would like the Basques to have their own independent country. In San Sebastián we will be situated at the center of all this ferment.

We will also use San Sebastián as a base for excursions around the Basque country: to Guernica, subject of the famous painting by Picasso commemorating the city’s destruction by Nazi aerial bombardment; to the French Basque country, half an hour from San Sebastian by bus; to the historic towns of Pamplona and Estella in Navarre, with their history of independence that dates back to the Middle Ages; to Bilbao, historically the center of shipbuilding, banking, and industry, and today home of the world famous Bilbao Guggenheim museum; and several typical Basque towns, where the Basque language remains dominant.

The program emphasizes learning Spanish for everyday communication of the kind students need for their stay in Spain. Spanish classes will take place at the University of Deusto; the classes will be given in small groups, and divided into beginning, intermediate, and advanced classes, according to the students’ level. Even though the Basque country has its own language, Spanish is commonly used and it is an excellent place to practice Spanish.

*Note that the fees stated above include the CHID fee of $300 but do not include some additional costs, including, but not limited to: airfare, Study Abroad Insurance (about $60/month), and personal spending money. Remember that these costs will differ by program. Be sure to read our Fees, Financing, and Withdrawal information for details about the fee structure and payment schedule.