Conflicting Currents: Romania and Georgia in a Turbulent Black Sea 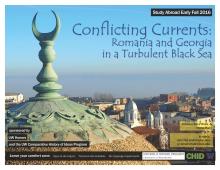 This program is co-sponsored by the UW Honors Program.

The Black Sea region catapulted to prominence in 2014 with the Sochi Olympics, Russia’s annexation of Crimea, and the ongoing crisis in Ukraine. Immersing ourselves in the cultures of Romania and Georgia, two countries on opposite shores of the Black Sea, and taking a foray into Bulgaria, we will gain an understanding of the turbulent dynamics of the region: given its location between East and West, the region has often experienced conflicting cultural and political influences. Currently, Romania and Bulgaria, on the Western shore of the Sea, are members of the EU and NATO; Georgia, on the far Eastern shore, finds its membership in the EU and NATO in limbo, its relationship with the East growing. Historically, however, all three share certain traits: all have at one time formed the border between East and West; all have been colonial outposts for larger Empires -- Ancient Greece, Rome, Byzantium, Ottoman Turkey, and Russia. Because of the geo-political context, all host multi-ethnic populations that have grown and changed with multiple migrations; and yet, all have distinct cultures that flourish within a multi-ethnic setting. We will explore this multicultural diversity and consider the ongoing process of negotiating issues such as nationalism vs. international affiliations and national identity vs. minority rights in the formation of functioning, pluralistic societies.

Theorists of multiculturalism suggest that cultures are overlapping and interactive, but still maintain distinct features which
individuals and societies wish to preserve. Using the countries we visit around the Black Sea as living textbooks, we will explore the concept of multiculturalism, and the ideal that different cultures can co-exist, inter-relate and influence one another in a peaceful and productive way. We will focus on how citizens and governments in this region negotiate national identity in a multicultural setting, exploring post-colonial power structures, the reinvention and reclaiming of their diverse cultures. We will also examine how the Black Sea itself, as a conduit between East and West, and as a site of multiple migrations of peoples over centuries, has become a microcosm for studying the dynamics of multiculturalism and the possibility of developing a transnational identity.

In all three countries, field trips, lectures, and museum visits will acquaint us with ancient and contemporary history to synthesize an understanding of this fluid region of the world. Reading literature, art, and history as cultural documents, we will track the complex unfolding of diversity. In Romania, we will begin our journey in Bucharest, a cosmopolitan capital, then move southeast to Constanta, Histria, and the Danube Delta, home to Islamic, Slavic, and Romanian communities. In Bulgaria, we will visit the medieval capital Veliko-Tarnovo, noting its ethnic and religious diversity. In Georgia, from our base in Tbilisi, we will explore the predominantly Georgian culture of the Caucasus Mountains, and compare it to more multi-ethnic regions in Kakheti to the East, and in Guria and Batumi, on the Black Sea.

During our travels, students will meet with local scholars, politicians, and artists to gain first-hand information about the region and the role of the Black Sea in fostering diversity. They will engage in self-reflective activities, including posting pictures and captions on our program blog, and exhibiting their photos and texts in Suzzallo Library after we return to Seattle

Past Programs in Romania, Georgia