Bosnia, Croatia, Serbia and the EU: New Era for All? 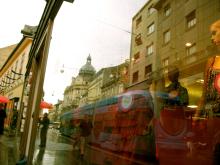 Bosnia, Croatia, Serbia and the EU: New Era For All? is an interdisciplinary program that examines in depth the Yugoslav conflict and its aftermath, with special emphasis on the roots of the conflict, international intervention, post-conflict transition and the role of EU integration in the long-term development of these three states and the Western Balkan region they influence.

The general publics and the governments of Bosnia, Croatia, and Serbia would like to share the political stability and prosperity of the European Union. However, the processes of post-conflict transformation and democratic transition require a long period of reform, capacity building and convergence with European norms if all three states are to enter the EU. The last several years provide strong evidence that these changes can take place peacefully and democratically. At the same time a strong strain of post-conflict nationalism will continue to compete for the dominant position in public debate and electoral politics. Also, the EU’s current fiscal crisis has created some uncertainty about its future success and stability.

Our program will focus on the interaction between European institutions and pursuit of competing national interests and ideologies in Bosnia, Croatia, and Serbia during a time of crisis in the EU. We believe the outcome will have significant consequences for the shape of the Western Balkans in the decade to come. Students will have the opportunity to meet with Bosnian, Croatian, and Serbian EU accession officials, Human Rights NGO’s, media outlets, and university faculty in law, journalism, political science, and sociology, to investigate the progress and set-backs to establishing regional transformation and stability. The program will also undertake a comparative study of official and independent culture in the region and the values they impart to public opinion, debate and inter-group tensions and collaboration.

Applications are closed for this program. View more details at the UW Study Abroad Website.
Files :

Past Programs in Bosnia, Croatia, and Serbia