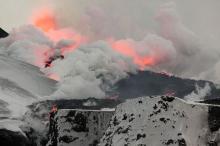 Icelanders are used to beginning again. During its millennium of human settlement, Iceland has had to recover from devastating natural disasters, the depletion of its natural resources, colonization by the Danes, and difficult economic hardships. Despite these challenges, Iceland has emerged as the most literate country in Europe, developed the highest life expectancy in the world, established a thriving culture of musical and artistic innovation, pioneered efforts in energy conservation, and leads the rest of Europe in post economic crisis political reform. Asked why they seem to thrive in the face of so much adversity, most Icelanders would reply that it is because of their capacity to adapt to new circumstances. The opportunity that Iceland offers, then, is an understanding of how the specific characteristics of a place (its environmental and cultural resources and constraints) can contribute to a general understanding of how adaptation and change occurs.

Unfortunately, few of us are given the analytical tools necessary to understand change. Most of us limit our understanding of the process of change to an understanding of specific acts of creation. These acts are said to have origins that mark an object or an event with a unique identity. Analyzing a point of origin then, promises to tell us much about the identity of that event. In practice, however, these moments are hard to locate (why this moment and not that?) and difficult to define (what qualities mark this moment as distinct?). Consequently, the CHID Iceland Program will use Iceland’s unique relationship to its environment and its singular cultural heritage to think about “second origins”, or the importance of beginning again. This focus allows us to eschew the hubris of creating something new in favor of the adaptability required to work with a world already in process.

Sites:
Beginning and ending in Reykjavik, “Regeneration: Matter, Myth, and Memory in Iceland”, will spend a full eight weeks developing a conceptual archeology of Icelandic cultural and natural history. When students arrive, they will begin their studies by exploring the cultural imaginary of the far north as portrayed in art, film, music, and literature. Students will get a chance to talk to internationally renowned musicians and filmmakers as they absorb the beauty of the capital city. We then head north to the wild but well settled Western Fjords. Here we investigate the relationship between Icelandic literature and environment by literally walking the story of one of the sagas and learn the basics of the Icelandic language. We then move to the fishing and farming villages of Northern Iceland where we investigate the social dynamics of honor societies at a Viking archeological site. In the desolate Eastern Fjords, we study the importance of flora and fauna in civil development by visiting Iceland’s only reindeer herd and forest. Our focus then shifts to the inorganic processes of geology and thermodynamics that mark the landscape of Southern Iceland. We read about the importance of ice (and take a “sound walk” on Europe’s largest glacier) and Iceland’s geology (by staying in a village that was engulfed by a volcano 40 years ago). We then return to Reykjavik to give the students a chance to “begin again” by fostering more creative and just relationship with the environment and each other.

Housing:
Since the program travels around Iceland, students will stay in many different living arrangements, including university dorms, youth hostels and hotels.

*Please note that this does not include UW Study Abroad (IPE) Fee ($275), airfare (about $1000, subject to when and where you buy your ticket), food (about $28/day), Study Abroad Insurance ($37/month), other health expenses/immunizations, and personal spending money.

Past Programs in Iceland