The Dialectics of Cuban/American Nationality 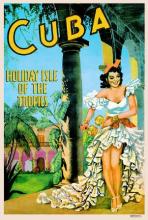 The focus of this program is to explore the ways in which Cuba and the United States have imagined both themselves and the other--and the ways in which those images are dynamic, co-constitutive, and historically grounded.

The first three weeks of the program will take place in Seattle, and will focus on how the U.S. has imagined Cuba and presented its history and culture through historical narratives, media images, and literary explorations. Far from the Cuban influence in Florida, Seattle is the ideal place for this portion of the program, as it will allow us to present a global image of the United States' vision of Cuba. By the end of this time, students should be able to articulate the image of Cuba as constructed by the United States, as well as how the United States' own identity is dependent on this image.

The following month of the program will take place in Cuba, and will be comprised of time spent primarily in Santiago de Cuba and Havana, with excursions in Eastern and Central Cuba. Through the analysis of primary and secondary Cuban sources, lectures by local experts, and visits to locations and monuments of historical/cultural importance, this month will give students firsthand insight into the life, culture, and history of Cuba, as well as provide them with the necessary resources to determine how the U.S. is seen from the Cuban point of view, as well as how Cubans see themselves. By the end of the time in Cuba, students should be able to articulate the ways in which the national and cultural identities of both the United States and Cuba are not only interwoven but are also interdependent.

The program will wrap up in Miami, where we will spend the last week of the program. Due to the large Cuban exile community in Miami, this location will serve as an ideal place for the debriefing of the program, and will allow students to experience firsthand how the two identities are intertwined, as well as to see how U.S.-Cuba relations continue to be an important part of the United States' identity.

The program fee is currently being finalized. Because airfare, visas, and most meals are included with the Cuba program fee, the cost well seem much higher than the cost for other programs. We estimate that the program fee will be $7,600. This cost includes airfare from Seattle to Miami, from Miami to Cuba, and from Cuba back to Miami. It also includes lodging in Miami and Cuba, travel and meals for field trips, Cuban visa, and all instructional costs. The fee does not include IPE Fee ($275), some meals, Study Abroad Insurance ($37/month) and personal spending money.

Past Programs in Cuba