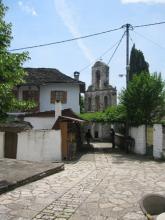 Greece has one of the longest records of continuity in world history. Its earliest "history" was thought to be myth until archaeologists discovered the physical evidence of Homer's account of the Trojan War and its survivor, Odysseus. Although that highly specialized culture was destroyed, it re-emerged to produce the equally brilliant culture of Athens, Sparta, and more than another 1000 city-states that managed to deal with the Great King of Persia. Incorporated into a larger kingdom by Philip II of Macedon and his son, Alexander, that culture continued until the success of the Romans. Yet it again re-vived when Rome fell to become the Byzantine Empire, which later fell to the Ottomans. Surfacing again with assistance from outside cultures, Greece became a modern, independent state in 1821. Currently, its crisis puts the world economy in dire circumstances. This is the nine thousand years of history that you will witness.

As a student on this program, your perspective will be from the city of Ioannina, in the northwest of Greece, a university town large enough to provide needs for our program, but small enough that students have been able to become familiar with people and places there without becoming lost or feeling anonymous. It is also the site of important historical developments that are relevant to the academic content of the program. Reminders of the past are abundant both in the city and the surrounding region, which is physically attractive, with its interplay between mountains and canyons and valleys. It was the seat of power for the Ottoman Albanian ruler Ali Pasha, and is the largest city in Epirus, a region over which sovereignty is still contested by some Albanians and Greeks. The Albanian University of Gjirokasta is nearby, serving our program as a site for a visit, during which they can experience a different perspective on regional tensions with students at the University.

*The program fee is $5,850. It will cover instruction costs, housing, most meals, and transportation for required field trips. The program fee does include: IPE fee ($275) airfare (apprx. $1,200) Study Abroad Insurance ($37/month) or personal travel and expenses.

Past Programs in Greece