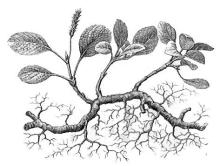 Adapted from the University Faculty Lecture given by Professor John Toews, February 28, 2007.

CHID has generalized and schematized the rhizome from a combination of botanical, semiotic and systems model in our use of it as the CHID logo.

Primary Characteristics of the Rhizome

One would think—since these conjunctures, associations and collaborations are so ephemeral and unstable that their imprint on individual stories, their ability to inspire loyalty to the whole network, must be weak—that the sense of engagement, the boundaries between insiders and outsiders must be incredibly porous and shifting.

Shouldn’t this form of a horizontally proliferating, constantly re-invented network of associations lead to a deficit in Trust, Loyalty, Sustained Responsibility and Stability?  Can you really count on those nomadic individuals that your caravan encounters in its temporary stays at various oasis conference hotels? Can the rhizome function as a community, as a home?

To my amazement and wonder CHID’s messy proliferation of projects and collaborations has produced the closest thing to a community of learning and scholarship, an academic home, that I have experienced since I entered academic life in 1973. And it’s not just me. As we all know there are recognizable CHID individuals and even some would say a CHID “culture.”  There are CHIDDIES who identify themselves with this rhizome and return to it sometimes years later as if they were coming home.  How can this be?

Why should a sense of community and loyalty to a common endeavor emerge from this kind of fluid, constantly proliferating, and self-transforming rhizomatic network?  I can’t really tell you. I have some preliminary hypotheses about how autonomy, intensity of commitment in collaboration, (however limited and short), and the experience of self growth within diversity, can actually trump homogeneity and authority in the creation of trust and loyalty—but surely this experiential reality must become a dimension of the rethinking of our past in relation to our future possibilities. It has created a new “problematic” for thinking historically about how the emancipation from identity recreates and perhaps even enhances the possibilities for ethical commitment, reciprocal attachments and collective action.