“…you can’t build something new with just anger... but it gets you moving” 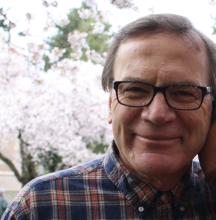 Nat: You've talked about relationships with former students over the years.

John: I've actually talked to some people about this and my colleagues have said that what you'll find out is that it won't be the honors you've received—it won't be the accolades you've gotten from your academic colleagues, which will fade very quickly because a lot of them are based on an undercurrent of jealousy and competition there all the time… whereas the connections you've made mentoring students or working together with students... you'll always be shocked.

You know like last weekend with these two, Phillip knows them both, Lydia Ruddy and Whit Mason, they're from the early days... and it was like, we hadn't seen each other for a decade and yet it was an incredibly affirming, warm interaction in which they were telling these stories about how—and you never knew that was happening—but how the things that happened when you were together with them and they were working with you shifted how their lives went and the direction they're going now... I think that is by far the most gratifying thing that teaching produces.

Nat: Who started talking about the rhizome?

John: You know, I wish Jim was alive because probably it appeared in one of these groups... at the time that the University was strategic planning, he had a course for students about the future of the university, "Rethinking the University," and you never know, it might have been a computer science student who asked, "What about the rhizome?".... What I always thought it was connected to was this Italian literary theorist and novelist... I'm blanking out on his name... Eco! Umberto Eco!

John: No, the book he wrote before that. And it talked about the rhizomatic model in it, and we had discussions about it in CHID 390.

John: But the rhizome was in his first novel, The Name of the Rose, which was like a mystery in which you had to figure out these connections in order to figure out what was really going on, and somehow the rhizome was connected in that. And then we started playing around with the notion of it in terms of these plants that were rooted in this vast network underground that came up in these different nodes.

But it also became a way of talking about focus groups, and the focus groups would provide a new, decentered center and they would produce connections to other groups, and so the boundaries would be constantly moving... from one group you would be looking toward the boundary from the outside and in the other group you were looking at the boundary from the inside and these groups would be layered and intermeshed so that it would be very difficult to make clear external and internal decisions about what was inside and what was outside of the boundaries.

Nat: Are you saying that they were “Boundless?”

John: Not the same. These are boundaries that are shifting—the connections are always there, they're not "connectionless."

Nat: Right. We're not erasing the boundaries, but we’re permeating them.

John: That's right. Yeah, I'm trying to think about what we did with the international programs. It wasn't that you dissolved yourself into a global community, but you began to understand that your particular culture, which produced you, you could imagine that from another culture that would have created a different perspective, and you would be able to look back on your culture from that perspective. And it doesn't break the boundaries, but it makes the boundaries not absolute.

Nat: It opens up the possibility of relations.

John: And it actually has something to do with spirituality, but I don't want to talk about that...

Nat: Oh, whoa whoa, what what?

John: Well because there's this empty space, right? What is it that allows you to move outside of a particular boundary and move into the other boundary and look back on the other space—and in between there, there is some kind of commitment to a spiritual process I think. And it doesn't have specificity in terms of doctrine... I guess you could have rhizomatic rituals, I don't know exactly how you would do them hahaha.

Nat: I can think of... some ideas are coming up haha.

John: So basically I’m really interested in this anniversary and Kathleen Belew’s visit and in us reconstituting Corporate U, not necessarily me teaching it, but us reconstituting that class as the right time to really work at this… rethinking how CHID can work toward creating a model for higher education which is not just a return to the 50’s or 60’s or something like that.

Nat: And it may not even be through the language of rhizomatics that the students feel that they can rally around to reimagine...

John: That’s right, but it's a good starting point, and you need some kind of a framework to begin arguing about this. And I think it is a complicated and maybe even self-contradictory framework, and problematic in a lot of ways, but I think it is a good model...

Nat: And I think recognizing that is the whole point. We’re going to help facilitate a focus group with students in the winter because when I was a Chiddie it was like, "There are six focus groups this quarter; which one do I wanna take?”…. Hopefully by the time we get to the spring, there will be a lot more of this activity and interaction already happening and then from that point doing a critical university studies-Corporate U type of class with an explicit focus on moving through the critical to the creative and from the challenges into the opportunities—through the anger into the future. I think a lot of people would really appreciate that.

Nat: Alright, I appreciate you taking the time to talk with me... :)

I thought a bit more about our first discussions in CHID of the rhizome model for thinking critically about communities of cultural meaning ("Built worlds" you might now call them I suppose) during the late 1980s and through the 1990s. The term entered into critical semiotics and social theory with Deleuze's and Guittari's books from the late 1970s but I think it became a general focus for discussion in CHID 390 from our reading of Umberto Eco's novel The Name of the Rose in the late 1980s. Eco himself self-consciously derived his model of open and closed semiotic systems from Deleuze and Guittari, although in the novel and his theoretical essays the term he favored was "labyrinth."

The Name of the Rose was an enormously popular mystery novel after it was translated into English in 1984 and eventually became the basis for a Sean Connery movie as well. I actually published a scholarly theoretical essay using the novel to unpack the relations between the interpretive and reconstructive methods of Robert Darnton (closed) and Dominick La Capra (open ) in 1991: "The Historian in the Labyrinth of Signs: reconstructing cultures and reading texts in the practice of intellectual history," Semiotica 83, 3/4 (1991) pp.351-384. The central protagonist in the novel—William of Baskerville—was portrayed by me in this essay as an interpreter/builder of rhizomatic models for grasping the open-ended character of relations of meaning.

Have a good weekend
John