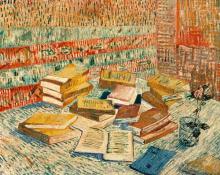 Seven. That’s how many readers the typical academic journal article could expect to have, my graduate advisor told me when I presented him with the fruits of my months of labor. His comment wasn’t meant to be discouraging. Scholarship often develops slowly and incrementally, and I should be proud of my first contribution, even if its measurable impact might be low. The article was also important for developing my intellectual voice, he suggested.
Given that he was probably the first of those seven readers, and my parents the second and third, I’ll confess to feeling a bit deflated. The glacial pace of academic publishing and the inexorable growth of the culture of “publish or perish,” which produces hyper-specialization and dilutes readership, are causing many academics to look for ways to reach larger, broader audiences, and more quickly. The “public intellectual”—that mythical figure forged in the Dreyfus Affair in fin-de-siècle France—has become vaunted once again: a scholar who carries ideas beyond the confines of the ivory tower. It’s a figure with obvious appeal, especially for those inclined to think that ideas do, or at least should, matter.
The public intellectual, however, has its detractors within academia, who worry that “public” and “intellectual” comprise a zero-sum equation. Such criticism can seem like petty elitism, but there may be good reasons for skepticism too. It’s not necessarily a matter of defending ideas for ideas’ sake, or a kind of idealist purism. Rather, as I argue in my own research, if thought is to remain critical—that is to say, if it is to cultivate reflective judgment, rather than simply reproduce existing common sense—intellectuals must be wary of conforming to the predominant discourse, or even of being coopted by powerful interests with an ear for buzzwords. In our hypermediated world, it is difficult to know how to strike a balance between intellectual rigor and easy communicability.
Despite this cautiousness, over the past year, without really planning to do so, I’ve found myself trying new modes of intellectual activity. I wrote a personal essay for the Stroum Center for Jewish Studies’s blog; I spoke on The Stranger's podcast, Blabbermouth; I even tried my hand at a poem. Despite being an instinctual Luddite, I’ve come to enjoy Twitter as a space for intellectual exchange (well, also cats, and German cinema jokes). And what I’ve come to realize is that while “public intellectuals” are always working in medias res, “in the midst of things,” unable to control or even track the reception of their ideas in the broader media ecology, thinking and writing for non-academic audiences need not be a dilution of intellectual rigor or a distraction from “real” scholarship.
Rather, such hybrid intellectual work can be highly “generative,” as CHID’s own Phillip Thurtle would say. Each of these projects and practices is a mode of engagement that opens new possibilities, including for the traditional academic work of writing books and articles. It’s what Chiddies do exceptionally well: thinking and creating in ways that make ideas matter, but without instrumentalizing them in a way that closes off further reflection. Faculty, staff, and students all contribute to the intellectual community of CHID, and those sparks of connection send powerful signals outward in countless directions, like radio waves.
This insight crystalized for me through producing my largest public intellectual appearance to date: a review essay in The Nation on racism and Dutch politics, which appeared on the day of the Netherlands’s parliamentary elections. Drawing together my teaching work in study abroad, critical theory scholarship, and political analysis, the essay allowed me to channel my analytical and rhetorical skills in a polemical mode. I sought to write intelligibly for a non-academic audience while also sparking critical thought about the mechanisms of racism in self-proclaimed progressive countries like the Netherlands. The essay is imbued with concepts and insights, moreover, that have been shaped by my roles in CHID as an alumnus, instructor, and staff member.
All of this work, in turn, impacts how I am approaching my scholarly book project (my revised dissertation). Writing in these different modes, with different sources of inspiration and for different audiences, has clarified what’s at stake in my project, whom I want to reach, and what I want it to do. It has also made me a more versatile writer. It hasn’t been a linear path, but with the skills I’ve honed in the process, I’m certain that my eventual book will find that elusive eighth reader.
By Nick Barr Clingan
People Involved:
Nicolaas P. Barr
News Category:
Share
PrintPDF