"On Focus Groups," with Izumi Nance 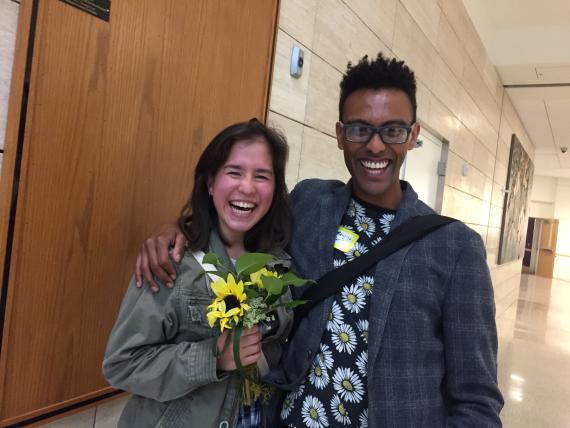 An interview from the rooftop bar of the Graduate Hotel, featuring Izumi Tiara Nance—junior in Comparative History of Ideas & Community, Environment, and Planning.

Izumi reflects on the experience of facilitating the CHID 496A Spring Focus Group titled, "Eroding Positionalities: Foundations and Infiltrations of White Supremacy in Higher Education,” and looks forward to future focus group ideas!

Nat: So, you've been doing this awesome focus group this spring 2019 quarter. How's that been so far?

Izumi: In three words, I feel like it's been flexible...

Nat: Okay... did you say "three words" before you thought of the three words?

Izumi: Yes, I did. It happens.

Izumi: I feel like it's been flexible. It’s been applicable, for sure. And it's been... I will say healing, in some capacity.

Izumi: Yeah, it's been fun.

Izumi: Those are my words.

Nat: Amazing, can you break it down just a little bit?

Izumi: Yeah. Flexible as in, at first I was really worried that I would have to bring some sort of strict material to bring to class, kind of how a professor does. But I guess the whole nature of the focus group is to be open and more... 'group,' rather than 'class.' And I think that expectation for me was probably harder than any of my peers.

Nat: Right, because you feel like the responsibility is on you?

We've all been on the same page, we're on the same level. And certainly there are students who have more experience with this kind of dialogue and discourse, so we've been able to provide a little bit more oomph for certain pieces of material. But overall, everyone's been present. There have may have been a few weeks where the overall trend was lower energy, but it's been so flexible that we've been able to take care of each other and take care of ourselves.

And that's what I would say healing is about, too, but there have also been sessions that we've met together and things have—and you were there to experience this—when things kind of veered off course, but around the same theme of conversation... so there are always ways to rein it back in and pull it full circle.

And then applicable is also in the context of our own lives. We're talking about the history that it pulls forward and where we are now.

Nat: Right, that makes a lot of sense—really well done.

Nat: Do you think you would do it again?

Nat: Right, right. I can imagine it's probably a little bit exhausting, right?

Nat:  So what do you think's on the horizon for you then?

Nat: Maybe something closer to music?

Izumi: Yeah, something closer to music and art. I'm thinking about, in my own time, starting a QPOC Arts Collective. So maybe if there was some space that we could all just use that focus group time as meetings... Okay, I was watching a documentary on Joan Jett last night...

And so, I think if we did that now, “Where's Seattle at with our music scene? What are the obstacles? What are the successes for QPOC artists?” Maybe we can find the common thing that we can all support each other on.

I'm thinking about musicians’ unions, advocate for musicians, provide resources, things like that. But I mean, that's just a thought.

Nat: Wow, I’ve never even heard of a musicians’ union.

Izumi: Yeah, I mean, Canada has them. I think there’s some in the U.S. Unsure...

That's the community I feel like I belong in, and there's no other work to do besides the work in your community.