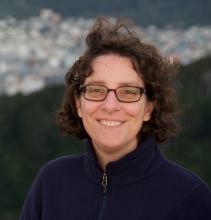 Having served as CHID Administrator for just over two-and-a-half years, I have been introduced as a CHID staff member numerous times while also being acknowledged as a CHID alum, as are all current CHID staff. There is usually talk about how, as CHID alumni, we all embody the values and principles inherent in the CHID program.

At these times, however, I have felt compelled to issue a caveat, saying something to the effect of, “Yes, well, I graduated in 1991…” Apparently, my Chiddie colleagues have interpreted this comment as either discounting myself for being, um, “older,” or separating myself in some other manner. While the former is not true, the latter is correct. I have thought it important to differentiate my experience as a CHID student from the more recent graduates, not because of any age difference, but because the CHID program is now much different than when I was a student.

During my first encounter with CHID—in the late 1980s/early ‘90s as a twenty-something CHID major—I could not have imagined the positive transformation that my chosen area of study would experience over the next quarter century. Although somewhat vague in my memory, my course of study involved selecting a group of pre-approved courses from within three broad areas that I remember as modern, middle, and ancient cultures/history.

I chose courses because of my love of literature (Themes in World Literature), because I procrastinated registering and got what was left (Middle Ages English Literature—deciphering Beowulf may be enjoyable to many, but that professor made it really tough on me!), and because I was required to take a non-European-centric course (Japanese Literature and Film)—which I would not have selected but through which I ended up becoming totally enthralled by Haikus, Kabuki, and the extraordinary instructor.

I also completed the only CHID course in the catalog: CHID 390: Colloquium in the History of Ideas. At that time, CHID 390 was it—there weren’t any other “CHID” courses. There are now over 40 CHID classes in the catalog, not to mention the many unique special topics courses that are offered each year. Though the great increase in the number of CHID courses is impressive and indicative of both student and faculty/instructor interest in critical thinking and interdisciplinary curricula, I am even more impressed with the evolution of CHID’s philosophy and principles of on-campus curriculum and of its study abroad programs since my time as an undergrad.

For example, although I traveled abroad to Avignon, France for my final quarter, I applied to the program through the main UW Study Abroad office. I wasn’t able to participate in a CHID program, because the first CHID-sponsored study abroad program was not offered until 1995. While in France, I learned about the nation’s history, its current political state and cultural values, and the French language. Yet I was not educated through a lens of self-reflection or cross-cultural awareness. I would have loved to have been challenged to grapple with the recognition “that the privilege of moving across borders and acting in multiple contexts is not shared among all people” and would have benefited at that young age by being “encouraged [to exhibit] a humble, respectful approach to the people encountered on [my] travels.”

Unlike my CHID alumni colleagues, I did not experience the public-service oriented and strongly student-directed curriculum or the engaged, self-reflexive learning community that exemplifies and imparts the CHID program’s evolving values and principles. Yet, through my own additional education and life experience, I recognize that I have developed my own CHID-like values and principles of social justice, self-reflection, and compassionate engagement. Perhaps my undergraduate experience was much different, but where I am now is so very similar to my staff coworkers. Thus, no more caveats for me: I no longer need to separate myself. We are all Chiddies.