Seas Within: Music for My People 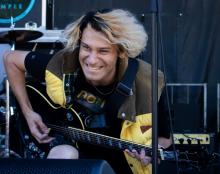 Hi! My name is @wilson.likethevolleyball, but the government just calls me Wilson.

Honestly it kinda bugs me that the government has given me a name because, honestly, we haven’t historically been super tight. In fact, I feel like often times the government represents ideas that don't at all reflect my values or truths. And that’s wack.

But you know what? For the better part of my lifetime, I have done little to nothing to change that. I am happy to report that in October of 2018, lack of action is not a guilt I have had to reconcile.

I’m in this band, Gypsy Temple, and we’re currently in the midst of the “Make Your Voice Heard Loud and Vote” tour—a tour of local schools and institutions with the goal of spurring voter registration and turnout. Voting is imperative to maintain an accurate and representative democracy. And often, the most formidable adversary young people in the United States face is apathy. I know for a fact this has rung frustratingly true in my past. Luckily for me, I have also had an unstoppable dread machine in my brain compelling me to go out and do something.

Apathy and anxiety. The two contrasting and unproductive tendencies struggling for dominance in me. Perhaps I should tell you a little bit about who I am and who I have been as a student at this prestigious academic institution:

I am so blessed to be a student in the Comparative History of Ideas program, where my mentors challenge me to see the academic value in all my pursuits.

I am a musician, producer, photographer, tutor, explorer, and digital archaeologist. I love to wring the internet of its knowledge and wish to become a true embodiment of the term “if you want something done, do it yourself.”

Despite my attempts to pursue and teach in nearly every field that piques my interest, I have always felt an acute imposter syndrome. It is as if the things I say and do hold nothing more than recreational or (hopefully) entertainment value. I often feel as though I am merely a spectacle—useful only as long as not boring. I am afraid that, recently, my anxieties have actually deepened to reflect a fear that I am embarrassingly ever attempting to remain the center of attention.

I only have one solace from all of this. Music. It has always been music.

The world of sonics has always captured me. I can, for a time, try on emotions—effortlessly sampling different versions of myself until I find the peace I need to reenter the physical plane.

I suppose I lied: I have two solaces from my anxieties of belonging. The other is people.

I crave companionship. I have always known I would want to combine these two fountains of peace but until recently my group musical projects had manifested my anxieties as opposed to healed them.

The flaw in these groups was not in the music, but the people. A musical mentor of mine, Matt Mitchell, once told me, “Create a family of your band. The music will follow.” I met Cameron when I applied to be a RainyDawg DJ. As it turned out, I followed music to my family. I suppose the path to wisdom doesn’t have to be linear.

Gypsy Temple is the first group musical project I have been a part of that has pushed me to grow alongside my brothers as opposed to leading them to my ideas. I will always maintain a close personal relationship with solitary musical creation and exploration, but Gypsy Temple has, for the first time, truly satisfied my desire to be at peace in a sea of music with a family of others participating in the creation and exploration of that sea within me.

Gypsy Temple has led me to a wealth of opportunities, the depth of which I could never have imagined. I find myself growing not just as a musician, producer, photographer, tutor, explorer, and digital archaeologist (you’d be surprised how many roles one must have in a band), but also as a person. The “Make Your Voice Heard Loud and Vote” tour is just one example of how this band has positively impacted both my life and the lives of others. I have always known that I have a voice, but Gypsy Temple has taught me to own my voice and use it to improve my community and empower those around me.