CHID Peru 2017: The Politics of Blackness and Indigeneity in Peru 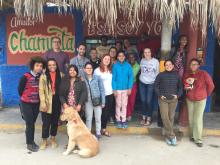 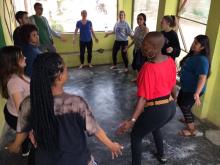 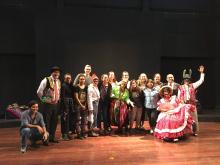 by Monica Rojas-Stewart and Adam Warren

Last summer, nine UW students had the opportunity to participate in a new CHID Study Abroad program in Peru, in which they explored the politics of Blackness and Indigeneity in the Andean country. Bringing together the arts, the humanities, and the social sciences, this interdisciplinary program led by Adam Warren (History) and Mónica Rojas-Stewart (Latin American and Caribbean Studies) invited students to observe, work alongside, and learn from performing artists, community leaders, and activists who have played crucial roles in preserving Afro-Peruvian and Indigenous artistic and performative traditions in three different sites (Lima, Chincha, and Cuzco). Students undertook this work while studying the history of Peru in order both to situate the work of artists in a broader context and explore how artistic production constitutes a way of thinking historically about identity and power. How do dance, music, and related forms of artistic production such as mask-making and costume-making create spaces, both figurative and real, for wrestling with the past to confront and challenge the injustices of the present? How do they enable individuals and collectives to imagine alternative political and social configurations and articulate forms of anti-racism? How do they enable people to make meaning of the past and engage the urgency of the present?

With support from CHID, the Global Innovation Fund, the Department of History, and the Latin American and Caribbean Studies Program, students participated in three key activities that stood out among the many included in the program. The first was an all-day workshop with Peru's leading Afro-Peruvian performance group, Teatro del Milenio (Theater of the Millennium). This activity, which took place at the end of students' first week in Lima, complemented the program's focus perfectly by showcasing the country's rich Afro-Peruvian traditions and their contemporary performance. Students also learned to perform several of the dances, received an introduction to the key instruments used in Afro-Peruvian music, and had the opportunity to interview members of Teatro del Milenio in a group setting for a fuller sense of the history of Afro-Peruvian identity and resilience in the face of marginalization in Peru and elsewhere. This knowledge served them well a week later when they traveled to the town of El Carmen, a predominantly Afro-Peruvian agricultural town in the province of Chincha, on Peru's south coast. There, they spent several days meeting and studying with members of the Ballumbrosio family, arguably the most famous family of performers of Afro-Peruvian music and dance in the country.

Students also participated in a second workshop over two days with Peru's best-known political theater company, Grupo Cultural Yuyachkani (Yuyachkani Cultural Group). Based in Lima, this group's work was crucial for furthering students' conversations about identity, performance, and the thorny politics of cultural appropriation because the actors and directors have adapted and incorporated ritual and cultural practices from many parts of the country into their work, treating them as inspiration for rethinking the nature of performance and the formal staging of plays. During the workshop, students were introduced to the history of Andean rituals and festivals, they viewed a private production of Los Musicos Ambulantes, Yuyachkani's most famous play, and they saw a public performance of the group's most recent production. Perhaps more importantly, they also participated in workshops on character development and performance with masks, scene development, and movement and choreography following Yuyachkani's model. They also spent extensive time meeting and interviewing actors and directors, which led to fascinating discussions about how the group navigates questions of identity, stereotyping, and discrimination in Peru. Students thus learned a great deal about innovations in Peruvian theater and the logics of identity and cultural appropriation in a multicultural country different from their own.

Students’ work with Grupo Cultural Yuyachkani prepared them to engage in educational activities in Cuzco and the neighboring town of Pisac, where they attended the raucous Virgin of Carmen Festival. There, students were able to view first-hand and discuss the rituals, processions, traditions, and ways of performing identity in a festival that they had studied intensively with Grupo Cultural Yuyachkani. Students attended two of the festival's four days and learned about the different dance troops, the stories performed through ritual and dance, and the ways in which the town coordinated putting the festival together. Finally, they came to see the festival as a venue through which history, identity, and difference came to be renegotiated and performed on an annual basis.

In addition to these workshops and festivities, students engaged in a variety of activities to gain a broader sense of Peruvian history, society, and culture. These included historical walking tours of the old colonial neighborhoods of Lima and Cuzco, meetings with recent internal migrants belonging to the Indigenous Shipibo-Conibo community in Lima's Cantagallo neighborhood, a field trip to visit community leaders who participated in the organization and construction of Lima's massive Villa El Salvador district beginning in the 1970s, and tours of a photographic exhibition and two memorials in Lima that commemorate the years of internal war, political violence, and repression in Peru during the 1980s and 1990s. Notably, students attended a performance by university students of a play about the war with Shining Path at El Ojo que Llora (The Eye that Cries), a site that pays tribute to those who died in the conflict, the vast majority of whom were Indigenous. This moving event and others inspired deep and productive discussions among students and program co-directors about identity, inequality, and social justice both in Peru and the United States.