Pursuit of an Extraordinary Life 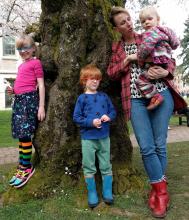 When still a babe, I internalized the story that a good serious person cultivates a clean, technical set of interests, and pursues them with uncanny passion until one’s efforts are duly exchanged for money-money. I swear, sometimes I still think that idea might work out for me, but mostly I work for pennies-pennies, trying to save the world from imminent climate catastrophe.

Classified as an “unconventional student,” I came to CHID after ten years of infrequent schooling from various institutions of higher learning across Texas. In that time before CHID, I was an artist, a printmaker, a nefarious head shop worker, a knife salesman, a job coach, an advocate, a companion for the dying, an organizer, a traveler, a too-frequent partier, and some odder characters in between.

This winding path forced me to question life on a truly existential level. And honestly, nothing could have better prepared me for the extended existential challenge of my work today: The ambitious adventure of trying to save the world from catastrophic climate change.

I work with a group called Climate Direct Action, whose mission is to inspire and commit bold unprecedented acts that directly interrupt the harm done by the fossil fuel industry and communicate the urgency of climate change. The group’s seminal action last year shut off emergency valves on every tar sands pipeline running into the US, in solidarity with the peoples of Standing Rock. My friends and colleagues, (including my husband) face felony charges for this action, and as much as twenty years in prison for what Reuters called the “largest coordinated environmental action in US history.”

For Climate Direct Action, I am a project manager, activator, fundraiser, community organizer, events coordinator, writer, and social media shaker. I’m also a mother of three human beasts, an artist, a player, a puppet master, a storyteller, and the occasional candle-stick maker. In CHID, I found a corner of an institution that validated my natural inclinations and desire to envision a world not determined by the structural forces that constrain most thinkers. The return on my education has been invaluable: I learned to map power in order to dismantle it. I disabused myself of capitalistic interpretations of my own value and agency. And I struggled with my existence, shedding the fear that holds most people back from pursuing truly ambitious courses of action. I work from an understanding that we are among the last generations to either live on this planet or we have to save it. Either case calls for the pursuit of an extraordinary life and I’m grateful that CHID helped me live and realize mine.