A New Art of Dialogical Imagination 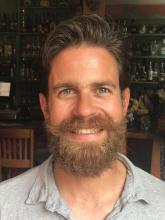 I teach at a Jesuit institution in northeastern Pennsylvania, The University of Scranton, in the town made famous by the American version of The Office. (When I was leaving England for this job, many a person quoted John Betjemen’s poem “Slough” (1937) by way of jocular encouragement: “Come friendly bombs and fall on Slough!/ It isn't fit for humans now…”). In truth, Scranton is post-industrial, still finding its way forward in an economy without need for anthracite coal. Locals say the university now run by Jesuits helped keep the city afloat. The Jesuits have a reputation of educating for justice, especially in cities where first-generation students can be given a chance at higher education. Let me share with the CHID community some commonalities between CHID and the Jesuit education that now occupies my time.

Jesuit influence on CHID is indirect; the hybrid tradition of Renaissance humanism and medieval scholasticism that mark Jesuit education seeps into Descartes, Foucault, and other luminaries circulated in CHID during my time (1996-2000). The term Jesuit applies to an order of priests within the Catholic church, founded in counter-Reformation Europe by a swashbuckling Basque by the name of Ignatius of Loyola. Pope Francis is the most visible contemporary Jesuit, whose words on the globalization of indifference match my own experience of CHID. He responded to the bombing in Yemen by saying: “this pointless slaughter will awaken consciences, lead to a change of heart and inspire all parties to lay down their arms and take up the path of dialogue.”

I still remember an encounter with one peer about twenty years ago; he was incarcerated for many years, but newly released, he stung my conscience with his hard-won perspective on drug laws, Marxist economics, and his anticipation of what we are now calling the “nitrate time-bomb” resting in the stones beneath our feet. Like a biblical prophet he gave voice to the very stones, which were crying out for justice. And what was his ecological appeal? It was stunningly simple: push-mowers avoid overuse of gasoline and have the added benefit of strengthening the user! How elegant, how simple, and how attuned to justice. The CHID community provides moments like these, where the dialogue envisioned by Francis happens organically and within a context of nourishing curiosity. CHID remains a bulwark against the globalization of indifference.

Let me return to the Jesuits for a moment. Mired as early Jesuit history was in the usual madness of cultural imperialism, many were ingenious pioneers in cultural anthropology and linguistic preservation. (The memory palace of Jesuit and sinologist Matteo Ricci anticipates the maps of Borges, the simulacra of Baudrillard, and the allure of virtual reality by centuries.) Ignatius of Loyola famously penned a text called Spiritual Exercises ostensibly to help people make better decisions about how to live. But as the thinker influential in Foucault’s life, Pierre Hadot, points out in Philosophy as a Way of Life: Spiritual Exercises from Socrates to Foucault, Ignatius simply stood within a tradition stretching back centuries wherein inquiry remained tethered to justice so that the imagination could discern how to pursue justice concretely. To mow or not to mow? How do I decide? Assumptions about value, culture, and interpersonal prowess rear their heads when such simple matters are examined more closely, especially if suburbia looms large in the global imagination. Betjeman in fact requests that some in Slough be spared his call for destruction because of the environmental degradation wrought by living among inhuman settings:

But spare the bald young clerks who add
The profits of the stinking cad;
It's not their fault that they are mad,
They've tasted Hell.

And talk of sport and makes of cars
In various bogus-Tudor bars
And daren't look up and see the stars
But belch instead.

The CHID community wakes many from their dogmatic slumbers to see the stars. In my experience, CHID dredges up one’s deepest commitments and sets the plough to work precisely so that transformative dialogue can be fruitful. To remain together amidst churning scrutiny is difficult work, and that kind of training matches well Jesuit education, which initially aimed at creating priests highly adept at language and sensitive to cultural nuance; they were, after all, to be sent to uncharted territories to pursue justice and save souls—not unlike Erin Clowes in her Sardinian adventures today, though I can imagine a spirited symposium led by Erin, Elena, and John Toews (as he channels Wittgenstein) on the term ‘soul’ more generally. If you had the gumption to watch Martin Scorcese’s latest film Silence, then you received a cinematic taste of Jesuit missions to Japan. Ventures of theirs in North America resulted in the preservation of indigenous languages that would have otherwise been lost. (Those gents are depicted in Black Robe; and since I keep referencing cinema, The Mission is certainly worth your time, not least because of the soundtrack by Ennio Morricone; the historical cry for justice for the indigenous in South America is re-created well and fits into the argumentative trajectory of the older version of CHID 110: The Question of Human Nature. When I peer facilitated for that course, I recall reading The Sparrow, which ends with the Jesuits as abused pioneers in space-travel.) At any rate, their schools, especially their high schools, are prized the world over, especially today in India. Rather than shape people solely for market value, such education placed the human drama of cooperation and reconciliation at its center.

A cinematic vision of educational ideals of this kind can be found in Arrival (2016). It provides an utopian vision rare these days, especially in the genre of alien films. The main character is a linguist who uses her gifts to learn to see non-linearly, and so alter humanity’s path to cooperation; the dream of a unified language captured in the Tower of Babel scene of Genesis is thus re-told. The linguist learns the semiotics of a visiting alien species alongside a physicist/mathematician. The intensity of the dramatic storyline is ratcheted-up by the potential for miscommunication and warmongering represented by worldwide militarism. Perhaps the staging is too binary, and simplistic, but the contemplative pacing and patient cinematography leave room for viewers to think more deeply about the purpose of dwelling together. CHID and Jesuit education share the compelling vision at the heart of that story, namely the beauty of sustained dialogue and its call for healing justice. Let me thank both communities for changing and deepening my own imagination, and for keeping me hopeful amidst the slow art of dialogue.