Being a Student in the Midst of Systemic Clumsiness 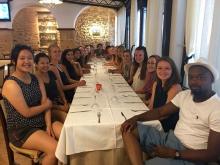 As a student of higher education in a nation that sits at the center of the hegemonic political-economic system, I am exposed to layers of normalized phenomenon that are hiding in plain sight. Studying abroad in a foreign environment helped me to notice what was foreign about my own world.

Side-by-side with my program peers, I was submerged in a snapshot of global trends at large while visiting a small island in the Mediterranean. From the momentum of a structured life with clear social norms and an intentional daily schedule, I found myself in unfamiliar territory with language barriers, juxtaposition, and a clumsy sense of order. It definitely adjusted my focal point. Here I was, a new CHID student passionate about vague ideals of social justice and a world without the existing systems of oppression.

I had only recently become familiar with the ongoing “migrant crisis”, longtime oppression of a population referred to as Romani, neoliberalism, “voluntourism”, and damage-centered narratives. Naively, I thought I was about to embark on an experience that would challenge me to create and gain a toolbox of ways to combat marginalization; that waiting for me was a plethora of information about the progressive approaches to creating a more just and multicultural world. Instead, I encountered more oppression and barriers to change than I could have imagined.

Amazing human beings told me of their normalized experiences as they sought mobility and found themselves in a track of constitutive political forces. There I was experiencing the absurdity of the world I live in. A world where I invested in an experience as a commodity and was notified by my technological riches, which I considered my property, of passive publications of the opinions around Brexit, relations between black communities and police, and an oppressive presidential candidate. I passively scrolled through narratives of my similarly privileged social media communities while sitting on a destination beach, undisturbed.

I learned that my presence and efforts were not needed and that I was in no position to “help” any of the people facing unimaginable oppression. I learned that nobody has any idea what they’re doing, systemically and on an individual level, especially in the face of historical precedents of division, national identity, colonialism, and capitalism. All of these forces are historically recent and part of a current system in a reality with no static systems or inherent meaning.

Most of all, I realized the power of sharing moments with other human beings who had inspiring strength, identity, and stories they could share with me. That in a world of absurdities one of the most real things is the human experience and the ability to decisively live each day. Now I am eager to experience and experiment with all the amazing things this world has to offer—equipped with the knowledge that there is no normal, and the confidence to face clumsiness.

By Abby Talkington (second from right in the photo)