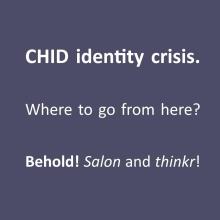 Did you notice anything odd about our haiku? Does it feel recognizable, yet wrong? We reversed the traditional five-seven-five syllabic structure.

Why? Because CHID is changing. We, like many others, wonder if the program will remain recognizable. But, like our reversed haiku, is change ever wrong or is it just becoming?

The early architects of the CHID program have been meditating on how the CHID model will endure the contemporary climate of neoliberal academia. The decennial Self-Study Report once again exposed concerns about the perceived value of the program. Such as “Will CHID receive proper tenure lines?,” “Will we finally receive ample funding?,” or “Must CHID sell-out/buy-in to receive these resources?”

But, whether critiquing or world-building, CHID students deliver. They weave disparate ideas, resonate across discourses, and navigate unmapped horizons. But what if they could also perform data analysis, craft digital media, or practice experimental research—if they could critically capitalize on other academic disciplines? CHIDdies could not only recognize what is wrong in the world, but then act on their evidence and create innovative assemblages...

We offer some quasi-experimental “offshoots” to nurture the growth of CHID’s intellectual community. Michael and Nat will continue to work on thinkr, a mobile app to make rhizomatic connections between people, ideas, and projects. Alec has reserved the CHID lounge on Tuesday afternoons as an open space—a CHID Salon—to seed spontaneous collaborations among undergraduate explorers. Piloting thinkr and Salon together, we will engage our fellow students in transformative learning by imparting the tools and training that bring germinal ideas to their fruition.

Like our reverse haiku, we wish for a model that’s recognizable, yet unfamiliar; one that finds a new middle between the culture of CHID and the ‘boundlessness’ of a corporate UW.

“A rhizome has no beginning or end; it is always in the middle, between things, interbeing, intermezzo.”
—Deleuze & Guattari, A Thousand Plateaus