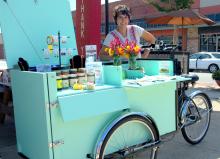 Shawn Goicoechea and Sandra Leyva met in Cyprus while participating in a CHID study abroad program directed by former UW Professor Robert Burrowes in the Summer of 2006. The class was an exchange between UW and the American University of Cairo, so the pair quickly made friends with their Egyptian counterparts, and at the end of the program, traveled to Cairo with their new friends and hosts. This was not the first CHID study abroad opportunity Sandra or Shawn had taken advantage of. In fact, they both travelled extensively during their time as undergraduates, and after graduating. “CHID instilled in us the hunger for adventure and exploration,” says Sandra, “which is why, when we graduated, we decided to travel and work in places that would challenge and transform our perspective of the world and our place in it.”

After graduating in 2008, Shawn and Sandra hiked part of the Pacific Crest Trail for 27 days; worked in relief efforts in Cuba, after hurricanes Gustav, Ike, and, finally, Paloma struck the island; and worked at an “Eco-Village,” a World Wide Opportunities on Organic Farms (WWOOF)-style organic farm, in the mountains of Lebanon. Sandra says, “My CHID studies focused mostly in social justice, community development, and the continuous effort to bridge the gap between theory and practice (praxis). I really wanted to get my hands on the ground to help me figure out exactly what I wanted to do once our travels were over.”

After months of travels, Sandra and Shawn decided to turn down their acceptance to UC Santa Barbara’s Global and International Studies Master Program, and instead try something different. “We knew that we were taking a chance, but we felt that it was necessary for us to leave conventional education institutions and do what CHID taught us to do best: continue our own education through experiential learning”. The couple wanted to tackle big problems by working locally, and help in the efforts to change things globally. “We realized that many of the problems afflicting the world seemed to stem directly from the American culture of unrestrained consumerism, that tacitly perpetuates the cycle of exploitation of people, natural resources, and the commons (air, water, soil, and all that simultaneously belongs to no one and everyone).”

Shawn and Sandra took a leap of faith and, after some research, decided to move to Conway, Arkansas, a place neither of them had ever been before. Conway, a suburban town of about 60,000 people, 30 miles outside of Little Rock, and with three colleges, seemed as good a place as any to try out their experiment to try to use culture as a vehicle for change. “We thought that if we could get people consciously consuming, producing, and participating with the things they wanted to see in the world, we could start transforming our community from one of mindless consumption to a community of creative production.”

The couple dreamed of a community space where people could get together and self-organize to transform ideas into projects, events, and activities that would bring diverse people together under a common cause. The couple moved into a two-story house and transformed it into a community space called La Lucha Space (https://www.facebook.com/thelocalsbe/ & www.thelocals.be). “We lived upstairs and transformed the ground level into a hybrid of public and private space to host a community space.” In this shared space, Sandra and Shawn started making daily meals to invite the community to come in, talk, and make the place their own. At different times, La Lucha Space hosted live music, poetry readings, community potlucks, meetings, film screenings, workshops, and anything the community decided the space needed to be.

As the organization evolved, La Lucha Space became a 501©(3) nonprofit and started programs with the help of the local community and federal grants. The organization stayed true to its CHID foundation of interdisciplinary collaboration and has programs ranging from an educational community garden to an initiative to cultivate the local techie community. The organization was awarded a USDA grant in 2012 to help create on-farm retail stores in order to increase food security and eliminate food deserts. In 2014, they were awarded a USDA Local Food Promotion Grant to create a food hub and help facilitate relationships between local farmers and restaurants, schools, and other institutions. Sandra states, “Food justice has been my main focus in the organization. Ever since we started sharing meals from La Lucha Space and thinking about where our food comes from, I started getting more and more involved with local farmers, farmers’ markets, and the local food movement in general”.

“CHID nurtured and continues to nurture us. It gave us a solid foundation, the opportunities, and the tools to live a life of purpose, full of adventure, experimentation, and a life-long commitment to learning and making the world a better place. We are very proud and grateful to be CHIDies.”