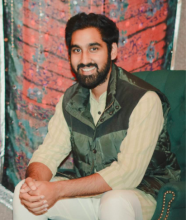 One thing comes to mind as I’m brewing my hot masala chai early in the morning. Deep in thought, I’m 24 hours into my fourth spring quarter—my final quarter as an undergrad if things go as planned… and I let the tea bag seep for too long! Bitter chai is always a shame. I reluctantly pour my unbalanced brew into my cup and wait for it cool. As the chai cools, I watch as steam rolls off the rim of the mug. The vapors tumble through the air, as I look at them I begin to reminisce. These past four years have afforded me some truly life-changing experiences and opportunities, ones that, had I not attended the UW, I would have never had.

In CHID I’ve learned that, when questions are the content, students have an opportunity. That opportunity being the chance to find their own answers. Having that chance to find a topic and zero in on its core principals and concepts is something that is unparalleled in most undergraduate programs. This year I chose to ask one question: Who am I? However, in the spirit of the humanities, this turned out to be much more complicated and nuanced than I first anticipated.

When my parents immigrated to the US from Punjab, they brought more than the money in their pocket and my mother’s dupatas packed in the suitcase. They brought THE recipe for masala chai (I may be a little biased towards my mother’s cooking), they brought an eagerness to learn English but desire to preserve Punjabi, and they brought with them a faith that taught them to be honest, share, and be grateful. My decision to embrace this faith was mine, but it was largely influenced by my parents’ decision to introduce my brother and me to it early in our childhood.

As I have grown, I have become more concerned with how this aspect of my identity, this Sikh identity, was historically constructed. I’ve heard the origins of Sikhism and Guru Nanak, the founder of Sikhism, for my whole life. Over time, I have slowly become aware that there are voices throughout Sikh history that people are beginning to forget. My interest to listen to the forgotten whispers scattered through Sikh history is not just a scholarly endeavor as I begin to construct my forgotten archive, but it is also holds a great deal of personal significance. It is my belief that a community draws its strength from all its members and all their voices. In better understanding these different voices, I hope to build a better understanding of the community of which I am a part, and hopefully make a meaningful contribution.

This past winter I had the honor of facilitating a CHID Focus Group that examined multiple different approaches towards studying Sikh History. Our class met regularly and discussed almost the entire breadth of documented Sikh history; it was exhausting. The quarter concluded with the first ever Punjab Forum where students from the class presented some of their most interesting findings. We had presentations from Feminism in Punjab to the Sikhism and post 9-11 hate crimes. I was extremely impressed with the response from the community. With over 40 members of the UW community in attendance, we had students, staff, and faculty come together to engage in productive conversations. It is a legacy that I am proud to have been a part of.

This quarter I have had the privilege of continuing some of the work I started last quarter with Dr. Purnima Dhavan from the Department of History, as I take a closer look at primary literature from the Singh Sabha movement beginning in the 1880’s. Many remember this period as being instrumental in the construction of certain religious boundaries that have defined Sikhism and Sikh identity moving into the 21st century. In many ways, this social justice movement helped many Sikhs to reclaim and strengthen an identity they felt was under attack by other groups in Punjab. From marches to liberate Sikh Temples and opening of Sikh schools in villages, to forming Sikh newspapers and disseminating pamphlets to re-familiarize people with Sikhism. Keeping this in mind, it is important to understand one key realization: throughout history some voices are invariably drowned out by their louder counterparts and are forgotten. However, if we listen carefully, those whispers that were once forgotten can be given an opportunity to be heard once again. My goal is to better understand those voices, and, through a creative writing project, to provide them with a platform to voice their thoughts and opinions. The forgotten archives hope to provide a new way to engage with the voices from this time, and hopefully discover new insights and understandings.