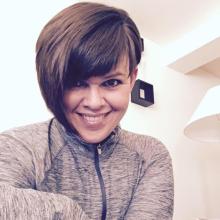 Jennifer says, "My research interrogates the ways in which American Officials on the Yakama Indian Reservation sought to garner Indian support for intensified wild horse eradication efforts from the late 1890s to the mid twentieth century. By veiling eradication as necessary to prevent land degradation and overgrazing, officials sought to appease land hungry non-Indian ranchers, while simultaneously undermining the Yakama's relationship with their horse herds. Through the fracturing of Indigenous ties to communal lands and the horses that resided upon them, officials were confident that they could remove any remaining barriers to Indian assimilation. However, my project has contemporary implications as well. Through looking at the current cross-cultural debate over the fate of wild horse herds on Yakama tribal lands through a historical lens, we are able to explore the complex tensions between animal advocacy groups and the Yakama nation over the best ways in which to manage growing wild horse populations. As such, the horse becomes a terrain of struggle whereby, certain advocacy groups, inflicted with imperial nostalgia imagine themselves as the protagonists in the battle of civilization and savagery; often times resorting to employing homogenizing and archaic stereotypes in an effort to persecute the Yakama for failing to exist within the parameters of the dominant cultures definition of what it means to be "authentically" Indigenous."

CHID Research Scholarship in April of 2015, and the Faye Wilson Scholarship via the Dept. of History that is awarded to students based on financial need and academic excellence within the field of American History. It generously covered three full quarters of my tuition (or one academic year).

McNair Scholar for 2015-2016--This is more of an opportunity than a scholarship but you are eligible for research funding.

And she is also an Undergraduate Research Leader advocating for students that would like to pursue research opportunities within the Humanities and Social Sciences, and a Peer Adviser in UAA

Visit Jennifer in MGH 141 (where she's a peer advisor) to find out how to get involved in undergraduate research today!