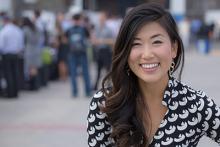 From Perspectives, the newsletter of the UW’s College of Arts and Sciences.
Photo by Peter Waterman.

Despite its prominence in the news during the past few years, many people still find Bitcoin confusing. Some reporters call it a stock, others call it money. But Bitcoin is actually a technology—one that is modernizing money through sophisticated encryption technology. And Jinyoung Lee Englund (BA, Comparative History of Ideas, 2006) has the difficult task of explaining it to the world.

Englund, director of communications and business development for the Bitcoin Foundation, is not an economist or an MBA or a computer scientist. Before joining the Bitcoin Foundation, she had not worked in the financial or tech industries. In fact she was downright puzzled when an entrepreneur friend involved with Bitcoin first introduced the concept to her in 2010. “I thought he was making it up,” she recalls. “I didn’t think what he was talking about was real.”

After more conversations with her friend over the next two years, the lightbulb turned on and Englund became excited about Bitcoin. “The clincher for me was Bitcoin’s potential in providing economic opportunity to individuals and communities traditionally locked out of financial services because they are too poor, live in very rural areas, or are considered too high risk,” she says.

It’s no surprise that the social implications of Bitcoin are what piqued Englund’s interest. At the UW she majored in comparative history of ideas (CHID), an interdisciplinary program that encourages students to delve deeply into topics of personal interest. Englund took a range of courses related to poverty and empowerment, including courses in religious studies, philosophy, international political economy, and business. “In CHID, I felt like I was in a community of people pursuing their passions and dreams,” she says.