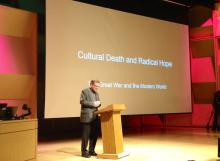 On December 3, 2014, Professor John Toews gave a talk on "Cultural Death and Radical Hope" to a sold-out audience in UW's Kane Hall.

By tracing the post-1914 transformation of the legacy of philosopher Friedrich Nietzsche, Professor Toews examined how the critical intellectual traditions of the central European fin-de-siècle were recreated and transfigured in the shadow of catastrophe. Toews placed Nietzsche’s legacy in the context of contemporaneous developments within the intellectual traditions of Marxism and psychoanalysis, showing how disillusionment with the foundational myths of Western humanism and historicism produced widespread commitment to the radical cultural construction of a “New Man” and new “World Order,” a commitment that ultimately culminated in the fascist regimes of the 1920s and 1930s.

The entire talk is available online through UWTV here: https://www.youtube.com/watch?v=eQxeEJxoAF4&feature=youtu.be

John Toews was the first Director of the CHID program, holding that position from 1982-2010. Through his pioneering efforts the program became one of the leading interdisciplinary undergraduate majors in the country. In addition to building up the Comparative History of Ideas Program, Toews's own scholarly work was recognized with a fellowship prize in 1984 from the John D. and Catherine T. MacArthur Foundation--one of the famed "genius grants." He is currently the Joff Hanauer Distinguished University Professor for Western Civilization and Professor of History and the Comparative History of Ideas. He teaches courses in modern European intellectual history and his most recent book is Becoming Historical:Cultural Reformation and Public Memory in Early Nineteenth-Century Berlin. He is currently finishing a book on the early history of psychoanalysis.