CHID students meet with officials in the Balkans 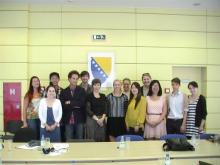 Students on Norman and Zorica Wacker's CHID Study Abroad program in Bosnia, Croatia, and Serbia got the chance to meet with two important officials this week.

First, Darija Ramljak, the Deputy Director of the EU accession office (the Directorate of European Integration, or DEI) in Bosnia and Herzegovina, spoke with students about the progress toward accession. Their visit was also featured on the DEI's website.

The class also had the privilege of meeting the acting U.S. Ambassador to Bosnia and Herzegovina, who shared his views on the current state of political affairs and the country's relationship with the United States and Europe.