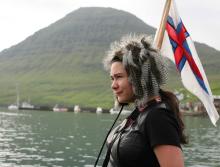 Comparative History of Ideas student Alaia D’Alessandro has received a Mary Gates Research Grant of $4,000 and will be traveling to Puerto Rico in April to continue producing her travel show Phonic Earth which explores community and social relationships to sound and music in different parts of the world. This will be the second episode of Phonic Earth, the first being completed in The Faroe Islands this past summer.

The first episode of the project Phonic Earth: When Islands Sings that was centered in The Faroe Islands has recently been publically released on youtube and has received over two thousands views in a couple days. The film starts off by diving into a scientific exploration of the links between sound waves and history, explaining how culture is physically preserved in timbre, rhythm and melody. Overtime these elements are transmitted through landscape, animals and people and gradually form dialects, music and other phonic customs. This magnificent process is demonstrated through the Faroe Island’s music culture. Grotto concerts, national festivals, interviews with musicians and more take the audience on a one of a kind trip through the sounds of the Faroe Islands. Go to youtube, www.facebook.com/phonicearthsound or phonicearth.com to view the documentary.