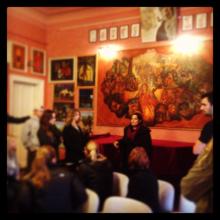 As part of the CHID Legacies of Empires Winter 2014 study abroad program, program co-instructor Erin Clowes has created a course that looks at identity and alterity by examining the current crisis of Roma minorities in Rome, Budapest and Prague. Through experiential projects with Roma individuals and communities in each destination, students personally engage with and challenge the ways in which political and popular discourse both create and castigate Roma populations.

The class began their journey in Rome, collaborating with anthropologist Adriana Goni Mazzitelli at University of Rome III and Professor Marco Brazzoduro, who connected them with the impoverished Roma camps in Salviati and Salone. Utilizing photography as a tool to connect UW students and Roma and non-Roma youth, they focused on their shared identities as sons and daughters, students, and photographers. The Roma youth had the chance to visit the University of Washington Rome Center, and University of Washington students had the chance to visit the camps, meet some of the residents there, and see for themselves the conditions there. For Roma populations in Italy these camps are considered “permanent housing.”

The program culminated in a photography exhibit and dinner at the Michele Testa CentroCulturale. University of Washington students cooked the meal with Roma women, created and mounted the photography exhibition, made photo journals with the youth, and wrote reflective letters about their experiences which were translated and included in the exhibit. The exhibit, titled “There’s no place like home” was attended by a political representative of the municipality and provided a chance for him to see the Roma camps through American eyes. One of the UW student quotes he admired in the exhibit was, “I can’t imagine being born into a country that keeps me down, saying it’s in the best interest of the nation.”

In Budapest the students and faculty worked with art historian and gallery owner Timea Junghaus, who facilitated connections with local Hungarian Roma students. Through their candid sharing of their life stories students were able to learn about the situation for Roma in Budapest and Hungary. Budapest does not house Roma communities in camps like Rome, but they they are the largest minority in Hungary and suffer severe discrimination. Their project there was to create a blog page entitled, “Why Save the Roma Parliament?” The Roma Parliament is not a parliament in the traditional sense, but a longstanding public space with a rich history of political and cultural activity for the Roma community of District 8 in Budapest. This space has been closed by the municipality at a time when nationalist and anti-Roma sentiment is on the rise in Hungary, and the Roma population here has no access to any civic space for education, cultural events, or political efforts.

In Prague students will have the opportunity to see the work of artist and activist Tomas Rafa, who creates art as a political statement for social justice. They will also have the chance to talk with CHID Affiliate professor and Docent of history at Pardubice University, Vera Sokolova, who will share the history of Roma marginalization and forced sterilization in the Czech Republic.