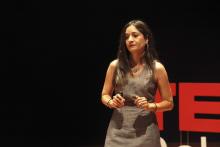 Food Justice for Humans, Animals and the Environment
A talk by lauren Ornelas, founder and director of Food Empowerment Project

How do our food choices impact humans, animals and the environment around the globe?  What does a just food system look like and how do we make it possible?  lauren Ornelas, of Food Empowerment Project, will talk about interlocking oppressions in the food system as she shares her life-long work to end exploitative food production practices.  Ornelas will speak about her advocacy for workers' rights in the Central Valley of California and Food Empowerment Project's efforts to improve access to healthy foods for low income communities and communities of color in the United States, her recent campaign to end child slavery in chocolate production in Ghana and the Ivory Coast, and her ongoing commitment to ending the exploitation of animals in the food system locally and around the globe.

Global food empowerment is on our plates, activists say

Going vegan in the 1980s was a much different experience than it is today — especially if you were in Texas.

For Lauren Ornelas, founder of the Food Empowerment Project (FEP), a nonprofit that encourages consumers to look at the ethical impacts of their food choices, being vegan meant ordering food at restaurants was nearly impossible.

Now living in California, a haven of vegan knowledge and influence, Ornelas laughs at how much easier getting food has become.

“When I first went vegan we didn’t have veggie burgers already formed in a patty,” Ornelas said. “We had to add boiling water to a dried packet you know? In some regard it’s so convenient, you can find almost anything that’s vegan now. It’s not like before where it was like ‘well, our cheese doesn’t melt, but there’s no animal suffering in it.’”

In 2006 Ornelas founded the FEP, which is run by a network of volunteers around the country.

She’s also building a strong alliances in Seattle with assistance from UW faculty in the Comparative History of Ideas program (CHID). As part of that initiative, Ornelas will be speaking on the UW campus this Friday afternoon.

Lauren Ornelas is the founder of Food Empowerment Project and serves as the group's executive director.  She is also the former executive director of Viva!USA, a national nonprofit vegan advocacy organization.  lauren has been active in the animal rights movement for more than 20 years.  After spending four years as national campaign coordinator for In Defense of Animals, lauren was asked by Viva!UK to start and run VivaUSA in 1999.  In cooperation with activists across the country, she worked and achieved corporate changes within Whole Foods Market, Trader Joe's, and Pier 1 Imports, among others.  She served as campaign director with the Silicon Valley Toxics Coalition for six years.

The event is co-sponsored by the UW Departments of Anthropology, Geography, American Ethnic Studies, Comparative History of Ideas, and the Diversity Research Institute.