Students find out how the islands sing in the Faroe Islands 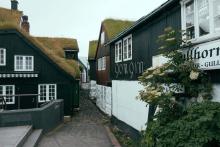 Halfway between Norway and Iceland lies the archipelago of the Faroe Islands, population 49,000. The islanders speak an ancient dialect of Norse, and, whereas Iceland had established a written language early in their history, the Faroe Islanders only established Faroese as a written language in the nineteenth century. This unique history allowed CHID’s Dr. Phillip Thurtle to design a study abroad program that encouraged students to explore how meaning can be created through voices and sounds.

On the Summer 2013 Faroe Islands study abroad program, students explored how the concept of “resonance” helps to rethink meaning making in language, music, art, and nature. Dr. Thurtle chose the model of the intensive research seminar for the program: students were given large amounts of reading in the first half of the program, with the second half centered around mentored research time involving meetings with small groups, the class, and one-on-one meetings with instructors, and culminating in a special symposium where students presented their work.

The CHID Faroe Islands participants were immediately surprised at how quickly the islanders embraced the program: Faroese scholars, writers, scientists, entertainers, and artists generously offered their time and expertise to the students engaged in research.

Student Alaia D’Allesandro was chosen to live stream the Faroe Islands’ largest concert, the G! Festival, and forged a relationship with the organizer, Jonhedin Trondheim, allowing her access to a number of popular Faroese musicians that she video interviewed as part of her final project.

Three of the CHID Faroe Islands students were interviewed on Faroese National Radio, where they talked about the philosophy of the program and their education as majors in the Comparative History of Ideas Program.

Kristian Blak, the leading jazz performer in the Faroe Islands and the owner of the islands’ only recording label, invited students (and accomplished saxaphonists) Abishek Kalkura and Levi Gillis to perform with him at three different concerts: one in a grotto on the ocean and two on the remote island of Mykines. Blak also invited a larger group of students to perform in his record shop.

The head of the department of the Social Sciences at the University of the Faroe Islands, historian Hans Andrias Sølvará, gave a lecture on Faroese history and offered help to a student who was studying the historical importance of the Faroese wool trade. One of the key figures in the Faroese home craft association showed some of our students how to card and spin wool, scientist and taxidermist Hens-Kjeld Jensen allowed students access to his samples, while award-winning poet Rói Patursson tutored one of the students on the study of Faroese folk ballads. students also connected with famous Faroese visual artists Joel Coen and Tróndur Patursson.

“This was the most successful study abroad program I have ever led,” says Dr. Thurtle. “The academics of the program were unsurpassed. Students actively participated during class discussions and the production of a final symposium encouraged them to work above and beyond on their projects and their presentations. A number of students came up to me afterward and told me that they had never worked so hard on a school project before. Many of them had to master new skills in order to complete their research. And the group dynamics were the best that I’ve had the pleasure of being a part of.”

The location, the academics, and the student cohesiveness all contributed to making this CHID study abroad program an overwhelming success. Dr. Thurtle is exceptionally grateful for those in CHID and IPE who helped him introduce 15 students to a place that few even knew existed. Because of this, they’ve made friends and developed interests and skills that will enrich the rest of their lives.