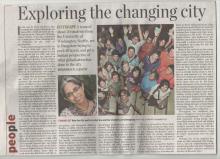 A team of about 20 students from the University of Washington, Seattle, are in Bangalore trying to peel off layers, and get a human perspective of what globalisation has done to the city.

In the last 10 years, professor Anu Taranath has come to Bangalore six times with a batch of about 20 students from the University of Washington, Seattle, to try and understand the complexities of the changing face of Bangalore in the wake of globalisation.

“India projects Bangalore as this ‘see what we’ve done here’ place to the world. But what else happens in a city whose stories are not told,” asks Anu Taranath, explaining the interest in our city. Anu’s mother is from Bangalore and father from Mysore, but she’s lived more than 42 years in the U.S.A. She teaches at the Department of English, and Comparative History of Ideas at the University, and peppers her English with accented Kannada.

“I began this programme 10 years ago based on my own unanswered questions. My extended family in Bangalore and Mysore have done well with the changes in India’s economy over the last 20 years, but their experiences do not tell the whole story. What about others in Bangalore who have not directly benefited from the ‘gifts’ of liberalisation or globalisation? How can we better understand the rapid changes to the city which gives opportunity to some and makes life more difficult for others? And what better way to learn, than to teach what we are curious about?” says Anu.

In Seattle, the IT hub of America, and home to many Indians, there is constant talk about Bangalore as the IT and BT centre of Asia, of development, progression, more wealth and opportunities, she notes.

“All cities have a shining face put to the world…developing countries have learnt to project themselves so,” says Anu. She began to create links with Bangalore-based NGOs, scholars, and civic-minded citizens who also think about these issues, such as the Environment Support Group who focus on environment justice issues such as road-widening, the Metro, and lake rejuvenation; and Hengasara Hakkina Sangha, a rights education and legal awareness organisation which works with rural women and gender empowerment issues.

The day I meet Anu’s students, who are mostly undergraduate students from disciplines as diverse as social science, international studies, human rights, English literature, bio-engineering, global health — they are heading off to various street markets – in Shivajinagar, Malleswaram, and Gandhibazar. “We hope to look at every perspective possible – how people became vendors, how they use this interaction space, how gender plays out in the street-markets…” The Seattle students are attending lectures, interacting with Bangalore-based thinkers, visiting landfills and lakes, staying with friends and families of NGOs to get a feel of the culture, and making the most of their five-week stay here.

“We get a perspective of how globalisation affects people in other countries. We often study theory, but here, we get a human perspective,” says a student from the group, explaining what they hope to learn from such a programme. Most of the students are between 18 and 24 years.

Anu takes this perspective further: “The students realise ‘the world is not just me’. What about those I don’t intersect with? When you introduce students to these interconnections, they want to learn more. There are layers to society anywhere and they want to understand how things work, their place as Americans in the world. ‘We are all global citizens’ anta badkoteevi,” she switches smoothly into Kannada. “But who really is a global citizen? Looking at Bangalore and India fits into the larger framework.”

Many of her students on the course have come back to intern in India. “It has changed something fundamental in them. I don’t bring my students here because it’s exotic. Rather, you see such a mix of ancient values with the ultra-modern just next to each other. You see these tensions played out in Bangalore. In comparison, Seattle is seen as already having made it, but it has its own tensions too. The way I teach is to encourage students to think deeply and ask uncomfortable questions; that’s what we do. We learn about other parts of the world and are constantly navigating issues of identity, of culture, race. We do a lot of reflection. Otherwise it’s easy to stay on the surface, on the tourist circuit. That’s one of the great things about education in America – students of different streams have opportunities to study diverse things and gain a broad-based knowledge. Here, it’s not so easy to study the humanities in this way...”

Throughout her childhood Anu came to Bangalore every two years to visit her grandparents. “It’s a place of fond memories, loving family, summers filled with good food and playing cards with cousins. But at one point I couldn’t reconcile that life with the social questions I had. Now I come as a grown up, a concerned citizen. I want to better understand how the city works.”

Perhaps one of the students best sums up this complexity that Bangalore is, and our understanding of the world today, when she said: “Bangalore is exactly what I expected, and not at all, also, at the same time.”